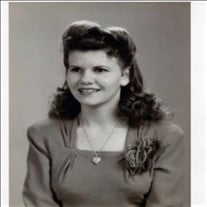 Zella Mae (Tincy) Mansour age 95 of Talihina, Oklahoma passed away from this life on Friday, June 11th, 2021 at her home with her family by her side. Tincy was born on December 29th, 1925 in Yanush, Oklahoma to Esther (Plummer) and Warren William Holland. Tincy graduated from Sabine High School in Texas. Shortly after, Tincy and her twin sister Tootsie worked as "Rosie the Riveters" during WW2 at the Spartan Aviation Company in Tulsa, building P-38's. She married Rouhana Mansour Jr. in September of 1947 and they began their life journey together. She worked by his side for many years in the family businesses. Tincy was of the Catholic Faith and was a very faithful servant. She had a love for God and her family. She was considered the moral compass for all of her family, providing a loving and secure home with Godly morals and values shared with each family member. She led by example, what she spoke, she also lived each day. Tincy will be deeply missed by all who knew her. Tincy is survived by her children, Linda McKinley and husband Tim of Talihina, OK, Ron Mansour and wife Kim of McAlester, OK, Bridget Smith and late husband Jimmie Jack of Geary, OK, and Renee Bailey and husband Mike of Talihina, OK; twenty one grand children; forty great grandchildren; nine great great grandchildren, as well as many nieces, nephews, cousins, friends, and a special family friend, Dot Clary. Tincy is preceded in passing by her parents, Esther and Warren Holland; husband, Rouhana Mansour Jr.; identical twin sister, Stella, as well as two sisters and three brothers. Pallbearers will be Paul S. Smith, Oran M. Smith, Jimmie D. Smith, Wade Barlow, Adam Barlow, Will Mansour, and Ron King. Viewing will be on Monday, June 14th, 2021 from 2:00 PM to 5:00 PM at McCarn Funeral Home in Talihina. Rosary / Wake Service will be on Monday, June 14th, 2021 at 7:00 PM at St. Catherine's of Siena Catholic Church in Talihina. Services will be on Tuesday, June 15th, 2021 at 10:00 AM at St. Catherine's of Siena Catholic Church in Talihina with Father Gade officiating. Interment will follow at New Talihina City Cemetery. Services have been entrusted to McCarn Funeral Service of Talihina, Oklahoma.

Zella Mae (Tincy) Mansour age 95 of Talihina, Oklahoma passed away from this life on Friday, June 11th, 2021 at her home with her family by her side. Tincy was born on December 29th, 1925 in Yanush, Oklahoma to Esther (Plummer) and Warren William... View Obituary & Service Information

The family of Zella Mae Mansour created this Life Tributes page to make it easy to share your memories.

Send flowers to the Mansour family.