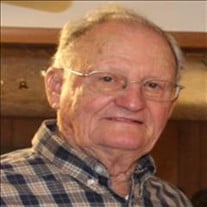 Willis Duane Strange, age 85 of Yanush, Oklahoma, passed away on December 11th, 2020 in McAlester, Oklahoma. Duane was born on March 21st, 1935 to Eva Regina (Fishel) and Albert J. Zearly in Coalgate, Oklahoma. Duane was raised in the Yanush / Buffalo Valley area and lived in the community most of his life. He was a devote member of the Buffalo Valley Baptist Church and held a role as a deacon there for many years, where he honorably served the Lord with all his heart. Duane married the love of his life, Dorothy Bridges and they started their family in the Yanush Community. They loved to garden and would proudly give their produce away to anyone in the community. Duane worked with his hands and was a hard working man. He retired from the McAlester Ammunition Depot where he served many years. Duane will be dearly missed by all who knew him. Duane is survived by his wife, Dorothy, of the home; son, Mike and wife, Shelia Strange of Talihina, OK; son, Mitch and wife Brenda Strange of Buffalo Valley, OK; ten grandchildren; eighteen great - grandchildren; two brothers, AJ Zearley and Phillip Zearley; two sisters, Alberta Capps and Lillie Hicks; as well as many nieces, nephews, cousins, and a host of friends. Duane is preceded in passing by his parents; son, Mark Strange; daughter, Elizabeth Strange Carter, and one grandson, Evan Carter. Pallbearers will be Chris Strange, Tim Strange, Trey Strange, David Carter, Nathan Lucas, and Tom Lucas. Honorary Pallbearers will be Tom Hairston, Clifford Wells, and Byron Bohanon. Visitation will be on Tuesday, December 15th, 2020 from 5:00 PM to 8:00 PM at McCarn Funeral Service in Talihina, Oklahoma. Graveside services will be on Thursday, December 17th, 2020 at 2:00 PM at AL Stephens Cemetery in Clayton, Oklahoma with Bro. Gary Fitzpatrick officiating. Services have been entrusted to McCarn Funeral Service of Talihina, Oklahoma.

The family of Willis Duane Strange created this Life Tributes page to make it easy to share your memories.

Send flowers to the Strange family.