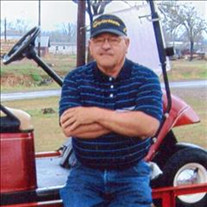 William Fredrick (Bill) Grammar of Talihina, OK passed from this life on August 4, 2020 at the age of 73. He was born on September 2, 1946 in Hartshorne, OK to Carl Grammar and Willie C. (Templeton) Grammar. Bill graduated high school in Cameron, OK in 1964 and upon graduation joined the United States Navy. He proudly served his country in Vietnam from 1964-1967. He was honorably discharged from service and later was determined to be 100% disabled, as he was injured during active duty. A man of many talents, he spent a lot of years building houses with his uncle and brother. He loved woodworking and enjoyed making things for his children and grandchildren. Bill also painted and restored equipment for D and H Materials and Equipment. He was employed with the Army Ammunition Plant and the Department of Corrections where he was a Correctional Officer, Case Manager and retired as a Training Instructor. He was the official barrier maker for the Annual Huddleston Jackpot for over 40 years. Perhaps he enjoyed the sport of rodeo as much as anything. He participated first as a contestant and later as a rodeo official. He judged rodeos and served on the Board of Directors for the Oklahoma Youth Rodeo Association. Later, Bill was an avid supporter of his children and grandchildren in the sport of rodeo as well as high school and college athletics. Other hobbies he enjoyed were, watching Oklahoma Football and playing golf with his friends and brother Jerry. With whom he is probably once again arguing with about the score. Bill was a member of the Yanush Assembly of God Church. He is survived by his wife of 44 years, Joni Grammar of the home. 4 children; son, W.F. Grammar and wife Misty of Hugo, OK. Their daughters, Presley Williamson and husband Tyler of Ozark, MO. (Olivia, Quinn and Nora) Paige Bowers and husband Rider of Unger, OK. (Hayzn and Raney) son, Dustin Grammar and wife Mandy of Falfa, OK (Easton, Jazzy and Denim) son, Jeremy Grammar and wife Kaci of Tuskahoma, OK. His daughter Katelin Wheeler and husband Kasey of Talihina, OK (Kaceton and Kanyon) Jakoda and Finley, 1 daughter, Ashley Grammar of Talihina, OK. (Ambree and Addy). He is also survived by a sister, Nettie Parker of Bartlesville, Ok and a sister n law, Linda Grammar of Hartshorne, OK. a brother, Bob Grammar and wife Sharon of Washington State. a niece, Shereen Ross and nephews David Parker and Matt Grammar. His in-laws, Don and Joye Huddleston and a host of other family and friends. Bill was preceded in death by his mother, Willie C Hunter, 2 brothers, Jerry Grammar and Carl Jennings Grammar, a brother in law Jim Parker and nephew Tony Parker. The family would like to extend their appreciation to his Hospice Nurse, Christine and caretaker, Melissa for all their help during this difficult time. Visitation will be on Friday August 7th, 2020 from 4:00 PM to 6:00 PM at McCarn Funeral Service in Talihina, Oklahoma. Graveside services will be on Saturday, August 8th, 2020 at 10:00 AM at Sardis Cemetery in Clayton, Oklahoma with Bro. Mike Bush officiating. Services have been entrusted to McCarn Funeral Service of Talihina, Oklahoma.

William Fredrick (Bill) Grammar of Talihina, OK passed from this life on August 4, 2020 at the age of 73. He was born on September 2, 1946 in Hartshorne, OK to Carl Grammar and Willie C. (Templeton) Grammar. Bill graduated high school in Cameron,... View Obituary & Service Information

The family of William Fredrick Grammar created this Life Tributes page to make it easy to share your memories.

William Fredrick (Bill) Grammar of Talihina, OK passed from this...

Send flowers to the Grammar family.