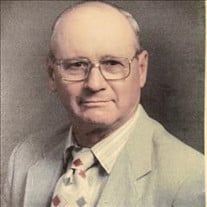 Elisha William Brown went to be with the Lord on March 5th 2021 at the age of 99. He had said he wanted to live to be 100 but grew weary and decided he wanted to be with his beloved wife, Gwen; daughter, Patricia, and son, Roy Lee. Elisha, more commonly known, as Son Brown or Brother Brown, was born January 15, 1922 in Quinton, OK to Maudie Bell Freeman Brown and William Franklin Brown. He was 18 years old and engaged when he saw "The most beautiful girl I have ever seen" standing in the kitchen door of a house with the light shining on her, in a house in Quinton. He didn't even know who she was at the time but said he knew he was supposed to marry her and that night he broke up with his fiance and pursued the love of his life, Gwendolyn Rush. God had a plan! He was later saved at a revival and recounted that he prayed "God, if you will give me a Godly wife and home I will serve you till I die." When he opened his eyes Gwen was on her knees at the altar. And he did just that. He and Gwen stood together in their faith and were never apart for the next 77 years until her death in 2017. He began his ministry at a young age and traveled from church to church as he felt led by the Lord and finally settled at the Yanush Assembly of God Church in 1987 where he served for 20 years until retirement in 2007. Brother Brown dearly loved hunting the mountains of Buffalo Valley. But more than anything, he loved talking about Jesus and leading people to the Lord. You could not go visit him without him asking you if you knew the Lord and praying with you before you left. There were many people saved in his home even after he retired. He never grew weary of doing the Lord's work. His greatest desire was to hear the words of his favorite King James Bible Scripture, Matthew 25:21 Well done, good and faithful servant. He was preceded in death by his loving wife of 77 years, Gwendolyn Brown, infant daughter, Patricia and son, Roy Lee Brown; his parents, Maude and William Brown, three brothers , infant brother, Paul Brown, Dewey Brown, Cecil Brown, and Eugene Brown; and one sister, Regina Dalton. He is survived by his son William Brown and wife Vivian of Buffalo Valley, OK and Donald Ray Brown also of Buffalo Valley, OK; one brother, Jack Brown of Buffalo Valley, Ok; two sisters, Helen James, of Quinton, OK and Virginia Shmallberg, of Leawood, Kansas; grandchildren, Billy Brown and wife Francesca of Kearney, Missouri, Debbie Shelton and husband Mike also of Kearney, Missouri and Annette Long and husband Trent of Kansas City, Missouri, Wendy Brown and husband Kelley of Buffalo Valley, OK and Lori Carter and husband Terry of Talihina, OK; 11 great grandchildren and 5 great great grandchildren. Visitation will be on Monday, March 8th, 2021 at McCarn Funeral Service in Talihina, Oklahoma from 4:00 PM to 6:00 PM. Masks must be worn inside the facility. Services will be on Tuesday, March 9th, 2021 at 2:00 PM at Yanush Assembly of God Church in Yanush, Oklahoma with Chaplain Kerry Kirkhart and Bro. Rodney Tate officiating. Interment will follow at Quinton Cemetery in Quinton, Oklahoma. Services have been entrusted to McCarn Funeral Service of Talihina, Oklahoma.

Elisha William Brown went to be with the Lord on March 5th 2021 at the age of 99. He had said he wanted to live to be 100 but grew weary and decided he wanted to be with his beloved wife, Gwen; daughter, Patricia, and son, Roy Lee. Elisha,... View Obituary & Service Information

The family of Elisha William Brown created this Life Tributes page to make it easy to share your memories.

Send flowers to the Brown family.