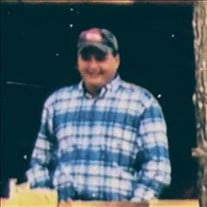 Wesley Wayne Wilson age 42 of Clayton, Oklahoma passed away from this life on February 13th, 2020. Wesley was born on September 17th, 1977to Brenda (Batton) Wilson and Daniel Wilson in Talihina, Oklahoma. He married Andrea (Briggs) Wilson in December 2012 in Lamesa Texas. He loved to hunt and fish and play with his nieces, whom he loved dearly. He always had a friendly smile wherever he went and never met a stranger. He will be dearly missed. Wesley is survived by his wife, Andrea of the home; parents, Brenda and Danny Wilson of Clayton, Oklahoma; sister, Heidi Wilson of Clayton, Oklahoma; and nieces, Abigail Wilson and Elizabeth Williams of Clayton, Oklahoma. Wesley is preceded in death by his grandparents, Stanley and Bonnie Wilson and Dolly and Earl Batton. Family Visitation will be from 5PM to 8PM on Monday, February 17th, 2020 at McCarn Funeral Home in Talihina, Oklahoma. Pallbearers will be Terry Don Wilson, Waylon Wilson, Adam Wilson, Ryan Cravens and Shannon Ben. Honorary Pallbearers will be Gary Batton, Fred Batton, David (Slim) Williams, John Mark Scarberry, Shane Henry, and Larry Waldron. Graveside services will be at 10:00AM on Tuesday, February 18th, 2020 at the Wilson Family Cemetery in Clayton, Oklahoma with Bro. Bob Graves officiating. Services are under the direction of McCarn Funeral Service of Talihina, Oklahoma.

The family of Wesley Wayne Wilson created this Life Tributes page to make it easy to share your memories.

Wesley Wayne Wilson age 42 of Clayton, Oklahoma passed away from...

Send flowers to the Wilson family.