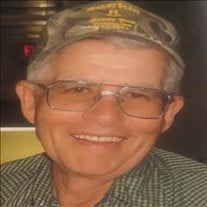 Wayne Henry Tidwell, age 82, passed away on November 24, 2021 at his home in Talihina, Oklahoma with his family by his side. Wayne was born on March 28, 1939 to Louise Anna (Leigh) Tidwell and Henry Olan Tidwell in Honobia, Oklahoma. Wayne was a member of the Talihina Assembly of God Church and a 32nd degree Mason. Wayne was a rancher with his wife by his side. He loved to hunt. He loved spending time with his family. He was a heavy equipment operator. Wayne loved a good laugh. He was a classic cut up. Wayne loved to have a ribeye steak and shrimp dinner "as long as someone else was paying for it." All who knew him enjoyed spending time with him. He is survived by his wife, Edna Tidwell; son, Mitchell Wayne Tidwell and Katie Blagg; daughter, Rhonda Tidwell; grandchildren, Stefanie Tidwell, Dakota Wayne (Kody) Reed, Brooke and Josh Daney; Blake and Emily Blagg-Tidwell; great grandchildren, Drake Wayne Reed, Ackshun Wayne Tidwell, Rush Cooper, Audie Rayne Daney; special aunt, Dee Tidwell; brother-in-laws, nieces, nephews, and cousins. Wayne was preceded in death by his mother, Louise Anna Leigh Tidwell; father, Henry Olan Tidwell; brother, Chester Leo Tidwell and his grandson, Shell Wayne Tidwell. As we lay this Husband, Father, Grandfather, Brother, and friend to rest, we are both sad and overjoyed. We are sad that he has left us in body, but we are overjoyed that he resides in his heavenly mansion today. Visitation will be on Monday, November 29th, 2021 from 4:00PM to 6:00PM at McCarn Funeral Home in Talihina, Oklahoma. Pallbearers will be, Dakota Wayne (Kody) Reed, Blake Blagg-Tidwell, Josh Daney, Scott Tidwell, Rusty Blue, Katie Blagg, and Johnny Emmert. Honorary Pallbearers will be, Ronnie Holley, Randy Guess, Eric Tidwell, Charles Maggard, Johnny Stegall, Carl Nichols, O.B. Brewer, Henry Comer, Doris Morgan and Ray Morgan. Services will be November 30, 2021 at 2:00 pm at the Talihina Assembly of God Church with Bro. John Stepp and Linda Stepp officiating. Interment will follow at the New Talihina City Cemetery in Talihina, Oklahoma. Services have been entrusted to of McCarn Funeral Service in Talihina.

Wayne Henry Tidwell, age 82, passed away on November 24, 2021 at his home in Talihina, Oklahoma with his family by his side. Wayne was born on March 28, 1939 to Louise Anna (Leigh) Tidwell and Henry Olan Tidwell in Honobia, Oklahoma. Wayne... View Obituary & Service Information

The family of Wayne Henry Tidwell created this Life Tributes page to make it easy to share your memories.

Send flowers to the Tidwell family.