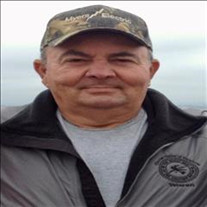 Virgil (Bo) Lynn Robbins Sr. age 71 of Kiamichi, Oklahoma passed away from this life on February 1st, 2022 in Fort Smith, Arkansas. He was the husband of Debra Kay (Shoemake) Robbins whom he spent 50 years of marriage with. Bo was born in Divide,... View Obituary & Service Information

The family of Virgil (Bo) Lynn Robbins, Sr. created this Life Tributes page to make it easy to share your memories.

Send flowers to the Robbins family.