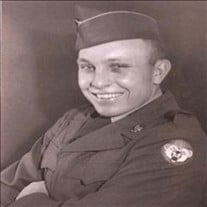 Truman Paul Long passed away on April 6, 2022, at Choctaw Nation Indian Hospital in Talihina, Oklahoma. Paul was born on October 14, 1930, in Fleetwood, Oklahoma to Charles Olen and Iona Long. He lived in Talihina for many years before moving to Ryan, Oklahoma where he graduated from high school. Paul enlisted in the U.S. Army where he was a cook. Paul was very proud to serve his country and feed many of his fellow soldiers. After being honorably discharged from the Army, Paul went to work as a civilian through Civil Service at Eielson Air Force Base, Fairbanks, Alaska. This is where he called home for over thirty years and during this time, he married and raised two daughters, Sandra and Paula. He was an avid outdoorsman who enjoyed taking family and friends on river boat adventures, as well as camping, fishing, and hunting trips, stalking moose and caribou. He was an active father who enjoyed playing games, planting gardens, making pancakes on Saturday mornings, and joking around. Paul played several team sports while in Alaska, such as basketball, softball, and bowling, and was a member of two Alaskan league baseball teams: The Alaska Goldpanners and Fairbanks Forty-Niners. He was a hard worker, generous, had a large heart, and would do anything for his family, as well as for others. Paul retired in 1984 from Civil Service, and returned to Oklahoma where he met Patsy, who would become his wife on July 7, 1990. Paul and Patsy resided in Arpelar, OK, for ten years, then moved to Talihina to be nearer to family and to play a larger role in their grandchildren's active lives. Paul and Patsy lived on a small farm where Paul took great pride in his garden, caring for his yard and surrounding property, riding in his tractor and working on their home throughout the years. He will be missed, but for those lives he touched, he will hold a special place in their hearts. Paul leaves behind to honor his memory, his wife of the home, Patricia Long; children, Sandra Veronick and her husband Kevin Gartner of Corvallis, OR, Paula Crouse and husband David of Heathsville, VA, Kathy Boren and husband Robbie of Talihina, OK; grandchildren, Dominique Marchant and husband Clay of Lebanon, OR, Trina Crouse of Denver, CO, Sam Crouse of Colorado Springs, CO, Dakota Boren and wife Britney of Red Oak, OK, Kaelin Johnson and husband Ry of Buffalo Valley, OK; siblings, Raymond Long and wife Meredith of Brighton, CO, Arline Curtis and husband Herman of Comanche, OK; great grandchildren, Leighton Boren, Langston Boren, and Rhett Johnson; as well as numerous nieces, nephews, cousins and extended family and friends. Paul is preceded in passing by his parents Charles Olen and Iona Long; siblings, Geneva Norbury, Eldon Long, Orville Long, Glenn Long, Geraldine Teague, Eunice Hellekson; great granddaughter, Riley Johnson. Memorial service will be on Saturday, May 7th, 2022 at 2:00PM at Prairie Grove Church in Talihina, Oklahoma. Cremation services have been entrusted to McCarn Funeral Home Service of Talihina, OK.

Truman Paul Long passed away on April 6, 2022, at Choctaw Nation Indian Hospital in Talihina, Oklahoma. Paul was born on October 14, 1930, in Fleetwood, Oklahoma to Charles Olen and Iona Long. He lived in Talihina for many years before moving... View Obituary & Service Information

The family of Truman Paul Long created this Life Tributes page to make it easy to share your memories.

Send flowers to the Long family.