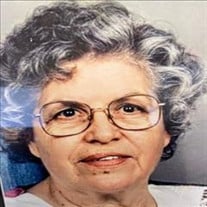 Sylvia Louise (Anderson) Sims passed away peacefully at her home, into eternity to be with her Savior Jesus Christ on July 29th, 2021. She was born on December 22nd, 1932 at the home of her parents, Lejah and Marie Anderson in Yanush, Oklahoma. Sylvia Louise graduated from Buffalo Valley High School. She had two sons in which she worked hard to take care of. She went to work in Shawnee at the Sylvania Plant, then on to Western Electric and retired officially from Lucent Technologies after 23 years of service. She lived in Moore, OK early on and resided for the last 40 years in Shawnee, OK. Most of her friends knew her as Sylvia, but her family here in Yanush knew her as Louise or Squeezy. She was a proud member of the Choctaw Nation Tribe of OK. Her father was a full blood Choctaw and an original enrollee. Sylvia is preceded in death by her husband of over 50 years; Herbert; parents Lejah and Marie Anderson; brothers, Leon Ray, William Leo, Richard and Kenny. Those left to cherish her memory are her two sons and their wives, Bill and Marsha Sims and Robert and Jeanie Sims; two brothers and their wives, John and Jeanne Anderson, and Jerry and Sheila Anderson; sisters, Phyllis and husband Wayne Cable, Betty Wetwiska, Sue Anderson, and sister-in-law, Diane Anderson as well as many grandchildren, great-grandchildren, great-great grandchildren, nieces, nephews, and other extended family. The family would like to express their great appreciation to the Citizen Pottawatomie Nation (CPN) health care workers who cared for mom for so many years. They'd also like to appreciate the Loving Care & Hospice for their wonderful compassion, help and concern. Visitation will be on Monday, August 2nd, 2021 from 4:00PM to 6:00PM at McCarn Funeral Service in Talihina, Oklahoma. Services will be on Tuesday, August 3rd, 2021 at 10:00AM at Cupco Church in Yanush, Oklahoma with Bro. Rodney Tate officiating. Interment will follow at Cupco Cemetery. Services have been entrusted to McCarn Funeral Service of Talihina, Oklahoma.

Sylvia Louise (Anderson) Sims passed away peacefully at her home, into eternity to be with her Savior Jesus Christ on July 29th, 2021. She was born on December 22nd, 1932 at the home of her parents, Lejah and Marie Anderson in Yanush, Oklahoma.... View Obituary & Service Information

The family of Sylvia Louise Sims created this Life Tributes page to make it easy to share your memories.

Sylvia Louise (Anderson) Sims passed away peacefully at her home,...

Send flowers to the Sims family.