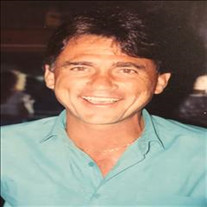 Steve Arron Followill, age 69, of Oklahoma City, Oklahoma passed away on Saturday, September 26th, 2020. Steve was born on June 22nd, 1951 in Durant, Oklahoma to Mildred Ledell (Brown) and Mitchell Leon Followill. Steve had a heart of gold. He was a kind and loving person. He was very generous and would give the shirt off his back to help anyone, which is probably why he never had a shirt on. He loved his girls and grandkids. He enjoyed being outside and gardening. Steve loved to experiment with food, and hot peppers, as he was a spicy one. Sports was another of his passions, OU Football and Thunder Basketball were two of his favorite teams, but he enjoyed all sports. In his younger years, he played softball and volleyball. Steve will be dearly missed by all who knew him. Steve is survived by his daughters, Felicia Ann Gray of Newalla, OK, Misty Dawn Thompson and husband Bill of Oklahoma City, OK, and Stephanie Lynn Thomas Hand of Talihina, OK; grandchildren, Tyler Wayne Gray and wife, Ashley of Harrah, OK, Steve Austin Gray of Choctaw, OK, Christopher Quinn Hale of Oklahoma City, OK, Ava Addison Hale of Oklahoma City, OK, Cayla Shaun Thomas of Denver, CO, Tyler Christian Patrick of Del City, OK, Cody Gray and wife Carrie, and Michael Jacob Hand of Mustang, OK; brothers, Ralph Dale Followill of Talihina, OK, Ivan Leon Followill and wife Kathy of Oklahoma, City OK, Chris Daniel Followill and wife Sharon of Newalla, OK, Cameron Ray Followill and wife Cindy of Oklahoma City, OK, and Earl Baines Jr. and wife Brenda of Oklahoma City, OK; "sister" Cheryl Andrew-Alaniz of Tuttle, Oklahoma; Uncle Joe, Uncle Stanley, and Uncle Jackie as well as many nieces, nephews, and cousins. Steve is preceded in death by his parents, Mildred and Mitchell Followill; and brother Michael. Visitation will be from 4:00 PM to 6:00 PM on Friday, October 2nd, 2020 at McCarn Funeral Service in Talihina, Oklahoma. Graveside Services will be on Saturday, October 3rd, 2020 at 2:00 PM at Albion Cemetery in Albion, Oklahoma. Services are under the direction of McCarn Funeral Service of Talihina, Oklahoma.

The family of Steve Arron Followill created this Life Tributes page to make it easy to share your memories.

Send flowers to the Followill family.