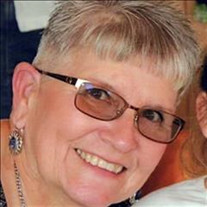 Sandra Kay (Phillips) Kralovetz, age 69, of Yanush, Oklahoma went to be with the Lord on March 22nd, 2021 at her home with her family by her side. She was born on December 23rd, 1951 in Edinburg, Texas to Betty June (Echols) and Harvey Phillips. She was raised in Donna, Texas, where she graduated high school in 1970. Sandra married the loved of her life, Ron Kralovetz on September 28th, 1976 in Brownsville, Tx and together they raised a family of five children; Kathy, Terry, Jim, Robby and Sheri-Lynn. Sandra worked 5 years as a business manager for Chevrolet, obtained her real estate license in Phoenix, Az, and eventually went to work for the McAlester Department of Corrections, where she retired after 22 years of service. She was a devote member of the Yanush Assembly of God Church, she taught Sunday school class for over 20 years. She enjoyed riding motorcycles, finding new scenic routes with the love of her life, yearly, month long trips to Sturgis for bike rallies, annual girls trips with high school class mates, crocheting hand made gifts for her family, baking and cooking for everyone. She had a special way of making anyone who entered her life feel as if they were family. Her love was unconditional and without judgement. She was nothing short of extraordinary. She was a dedicated wife, mother, grandmother, great grandmother, great great grandmother and all of her grand children were her greatest joys. She was adored by all and will be deeply missed. Sandra is survived by her husband, Ron of the home; five children, Kathy, Terry, Jim, Robby, and Sheri-Lynn and husband Roland Taylor; twenty three grandchildren; thirty seven great grandchildren; brothers, Robert and David Phillips; sister, D'Ann Mettlach and husband Gerold, as well as numerous nieces, nephews and a host of friends. Sandra is preceded in passing by her parents, Betty and Harvey Phillips, grandparents, and her brother, Sam Phillips. Pallbearers will be Bo Phillips, Stephen Phillips, Stoney Phillips, Conner Phillips, Caden Phillips, and Gerold Mettlach. Honorary Pallbearers will be Robby Kralovetz, Jim Kralovetz, Roland Taylor, Tanner Perry, Clint Wadley, Flint Barns, and Eddie Valdovinos. Visitation will be on Thursday, March 25th, 2021 from 4:00 PM to 6:00 PM at McCarn Funeral Service in Talihina, Oklahoma. Services will be on Friday, March 26th, 2021 at 2:00 PM at Yanush Assembly of God Church with Bro. Dustin Grammar officiating. Interment will follow at AL Stephens Cemetery in Clayton, Oklahoma. Services have been entrusted to McCarn Funeral Service of Talihina, Oklahoma.

Sandra Kay (Phillips) Kralovetz, age 69, of Yanush, Oklahoma went to be with the Lord on March 22nd, 2021 at her home with her family by her side. She was born on December 23rd, 1951 in Edinburg, Texas to Betty June (Echols) and Harvey Phillips.... View Obituary & Service Information

The family of Sandra Kay Kralovetz created this Life Tributes page to make it easy to share your memories.

Send flowers to the Kralovetz family.