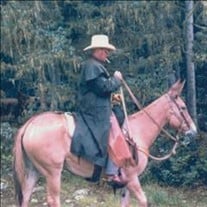 Samuel Clark Scott Stephens, age 75 of Clayton, Oklahoma passed away on May 10th, 2022 at home in Clayton, Oklahoma. He was born in Durant, Oklahoma on June 7th, 1946. Sam spent his younger years growing up in Byers, Texas and moved to Clayton, Oklahoma his senior year with his parents and brother. He attended college at EOSC, SouthEastern and OSU. He was a soldier in the U.S. National Guard. Sam married his high school sweetheart, Janice Eulene Tyler on June 16th, 1967 at his parents home in Clayton. He was Vice President of the Clayton State Bank for 32 years. His favorite hobby was collecting guns and he enjoyed collecting antiques with his wife, but his pride and joy were his prized mules which he rode on many trail rides. He was a rancher, and a Ford Truck and John Deere man through and through. He was also an avid reader and Civil War buff. Sam was a loving husband and father of two children. Sam is survived by his wife of 54 years, Janice Eulene Tyler Stephens; daughter, Jody Dawn Stephens of Clayton, OK; son, Scott Tyler Stephens and wife Kathy of Garrison, TX; grandson, Tristan Chase Stephens of Poteau, OK; granddaughter, Piper Stephens; great - grandson, Luke Smith; nephews, Coy Lee Stephens and wife Whitney Dawn, and Calvin Leon Robson; niece, Deborah Sherwood and husband Keith as well as numerous great niece's and great nephews and a host of friends. Sam is preceded in passing by his parents, Samuel Mingee Stephens and Betty Sue Scott Stephens; brothers, (twin) Robert Stephens and John Ray Stephens. He remained strong for his family until the end. On his final day he was surrounded by loved ones and passed from this life peacefully. He will be greatly missed by countless friends and loved ones. Honorary Pallbearers will be David Ralston, Jerry Blackburn, Stephen Poe, John Lance, Aidon Stephens, Danny Shockley, Pete Heflin, and Thomas Hendershot. Graveside Services will be on Friday, May 13th, 2022 at 1:00PM at Stanley Cemetery in Stanley, Oklahoma with Bro. Murl Nelms officiating. Services have been entrusted to McCarn Funeral Service.

Samuel Clark Scott Stephens, age 75 of Clayton, Oklahoma passed away on May 10th, 2022 at home in Clayton, Oklahoma. He was born in Durant, Oklahoma on June 7th, 1946. Sam spent his younger years growing up in Byers, Texas and moved to Clayton,... View Obituary & Service Information

The family of Samuel Clark Scott Stephens created this Life Tributes page to make it easy to share your memories.

Send flowers to the Stephens family.