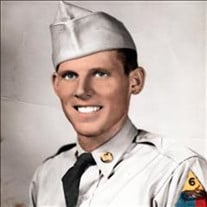 Roy Leon McCormick was born on October 18th, 1928 to Charlie and Bessie McCormick in Sardis, Oklahoma. He excelled at basketball in high school, He was graduated from Buffalo Valley High School and married his high school sweetheart, Louise Mattox, in 1948. Leon was a member of the U. S. National Guard and served in the Army where he was stationed in Fort Sill, received an honorary discharge from the 44th division as a Private First Class after being injured in Korea. He was a carpenter and in 1964 he built the Hickory House BBQ with his best friend Roy James, which he ran with his wife along with the service station next door. He served as president of the Chamber of Commerce in Talihina. When he moved to Sallisaw in 1974, he reopened the Hickory House. Over 20 years later, he moved back to the Tuskahoma area. Leon enjoyed horse racing and owned several championship race horses. He enjoyed fishing, dominos, cards, pools, gardening and sports. He was an avid fan of westerns and Sooner football. Leon was a member of the Yanush Assembly of God Church. When his health failed, he was put under the care of the Talihina Veteran's Center where they took wonderful care of him until he until he was discharged into hospice care. Leon loved his family more than anything else and will be deeply missed. On September 6th, 2020 Leon exchanged his earthly home for Heaven leaving behind his wife of 72 years, Louise. He is also survived by three siblings, Joy Huddleston, Wayne McCormick, and Jim McCormick; two children, Dennis McCormick and Vickie and husband Joe Lusby, and a bonus child, Twyla Stafford; five grandchildren, Kim, Jordan, Paige, Alycia and Chris, and one great grandchild, Phoenix. Leon was preceded in death by his parents and siblings, Helen Youngblood and Charles McCormick. Pallbearers will be Anthony McCormick, Michael McCormick, Kevin Huddleston, Harold Mattox, Harvey Mattox, and Jeff McCormick. Services will be on Thursday, September 10th, 2020 at 2:00 PM at Yanush Assembly of God Church with Bro. Dustin Grammer officiating. Interment will follow at Cupco Cemetery in Yanush, Oklahoma. Services have been entrusted to McCarn Funeral Service of Talihina.

Roy Leon McCormick was born on October 18th, 1928 to Charlie and Bessie McCormick in Sardis, Oklahoma. He excelled at basketball in high school, He was graduated from Buffalo Valley High School and married his high school sweetheart, Louise... View Obituary & Service Information

The family of Roy Leon McCormick created this Life Tributes page to make it easy to share your memories.

Send flowers to the McCormick family.