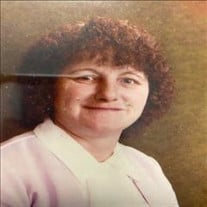 Reba Fern Steudeman, age 74, of Talihina, Oklahoma passed away from this life on February 1st, 2021 . She was born on January 4th, 1947 to Odessa Gay (Flood) and Louis Douglas Moon in Sherman, Texas. Reba married Donald Steudeman on December 17th, 1961 in Ardmore, Oklahoma. She was of the Seventh Day Adventist faith. Reba worked as a CNA and in the laundry at the Talihina VA Center for many years before her health declined. Reba will be dearly missed by all who knew her. Reba is survived by her husband, Donald Steudeman of the home, two sons, Ronnie and wife Mary Steudeman of Clayton, OK, and Tommy Steudeman of Chester AR; two brothers, Kenneth and Allen Moon of Lamar, AR; one sister, Theresa Sowells of Lamar, AR; grandchildren, Shawna and Randale Tucker, Michael and Tiffany Steudeman, Dusty and Sherry Steudeman, Tommy and Michelle Steudeman, Jodi and Mickey Pearcy, Starla and Steven Robbins, Bobby Steudeman, Dustin Pettygrew, Aaron Mclean, and Misty Holley, as well as numerous great grandchildren, nieces and nephews. Reba is preceded in death by her parents, Odessa and Louis Moon; three sisters, Dorothy McBride, Betty March, and Norma McCormick; as well as one son, Jimmy Don Steudeman. Funeral Services will be on Friday, February 5th, 2021 at 10:00 AM at the New Talihina City Cemetery in Talihina, Oklahoma. Services have been entrusted to McCarn Funeral Service of Talihina, Oklahoma.

The family of Reba Fern Steudeman created this Life Tributes page to make it easy to share your memories.

Send flowers to the Steudeman family.