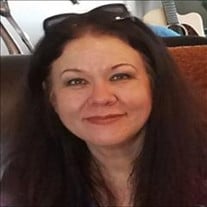 Peggy Lee Cox, 64, passed away September 28, 2020. Peggy was born September 17, 1956 in Claremore, Okla., to Richard Knox and Virginia Dickinson. Peggy was preceded in death by her husband, Lee Cox, brother, Shawn Dickinson, and her mother, Virginia Dickinson. Peggy is survived by her 3 children, Kayse Reusser and spouse Nathan, Holly Ray and Jesse Cox. 3 grandchildren, Levi Turek, Spencer Turek, and Zane Reusser and god granddaughter Jaylene Hylton and spouse Brad. Sister, Cathy Nyman and spouse Steve. Brothers, George Knox, Luke Dickinson, Justin Dickinson and spouse Linda. Peggy is also survived by many loved nieces, nephews, cousins, uncles and aunts. Peggy married Lee Cox in 1973. Together they had 3 children and a loving marriage until Lee passed away in 1995. Peggy graduated with a BS in Elementary Education from Langston University. She enjoyed her teaching years and retired in 2013. In recent years, Peggy spent much of her time playing her guitar and writing her own songs. She organized gatherings where musicians could meet up, and share their songs and music with one another. Peggy also enjoyed nature walks with neighbors and friends, yoga, traveling, plants, her cat Crissy and having family time. She was a wonderful wife, mother, and friend! Cremation Services are being provided by McCarn Funeral Service of Talihina, Oklahoma.

The family of Peggy Lee Cox created this Life Tributes page to make it easy to share your memories.

Send flowers to the Cox family.