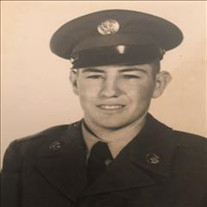 Orvil "Abe" Leon Couch, age 87, of Pocola, Oklahoma was called home to our Lord and Savior on March 2, 2022. Orvil was born on April 9, 1934 in Elmore City, Oklahoma to Effie and Hobson Couch. He proudly served his country in the U.S. Army from 1954 to 1957. After his time in the service, he worked as an electric motor technician, then went on to work as an industrial x-ray technician. He eventually started his own industrial x-ray business, retiring in 1998. In June of 1966, Orvil married the love of his life, Beverly (Custard) Couch. This marriage brought forth two sons, Matthew and Daniel. They lived in Whitesboro, Oklahoma for many years before moving to Montana, New Mexico and finally settling in Borger, Texas until his retirement in 1998 when they moved back to Oklahoma. Not wanting to be too far from their two grandsons, Orvil and Beverly spent almost a decade living in Mississippi before once again moving back to Oklahoma. Orvil is survived by his loving wife Beverly of 56 years; his son, Matthew Couch and his wife Sherryl of Madison, Mississippi; two grandsons, Daniel and Tyler; brother, Jake Couch and his wife Ramona of Littlefield, Texas; as well as numerous nieces, nephews, cousins and a host of friends. Orvil will be deeply missed by all who knew him. Orvil was preceded in passing by his parents, Effie and Hobson Couch; son, Daniel Couch; and siblings, Betty, Bill, Jocie and Ben. Visitation will be on Friday, March 11, 2022 from 10:00AM to 12:00PM at Christ Church in Lenox, Oklahoma. Services will be on Friday, March 11, 2022 at 2:00PM at Christ Church of Lenox in Lenox, Oklahoma with Bro. Johnny Elrod officiating. Pallbearers will be John Grizzle, Jim Elrod, Joe Chrisman, Jeremy Serbout and Kevin Campbell. Interment will follow at Lenox Cemetery. Services have been entrusted to McCarn Funeral Service of Talihina, Oklahoma.

Orvil "Abe" Leon Couch, age 87, of Pocola, Oklahoma was called home to our Lord and Savior on March 2, 2022. Orvil was born on April 9, 1934 in Elmore City, Oklahoma to Effie and Hobson Couch. He proudly served his country in the U.S. Army... View Obituary & Service Information

The family of Orvil Leon Couch created this Life Tributes page to make it easy to share your memories.

Send flowers to the Couch family.