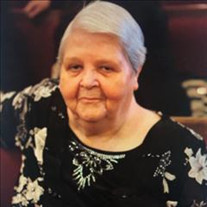 Mary Elizabeth Stuart went home on December 6th, 2019 in Waco, Texas at the age of 91. Mary was born on January 20th, 1928 to Algernon and Nona (Jackson) Angwin in Albion, Oklahoma. Mary lived in the Albion area, where she raised 4 children after losing her husband in 1961, until she relocated to Texas. Her pastimes included reading, tending to her plants, and telling everyone who would listen about her grandkids. In her later years, she discovered Catalogue purchasing, and bingo. She was over the moon when she won - a bag of chips, diet coke, or a candy bar. After two years of college, at OBU in Shawnee, she returned to Albion, and taught school in the Tuskahoma Public School, for 2 years. Shortly after, she met David Stuart, and soon after they were married. Not long after that, their first child was born. They moved to California, where a second child was born. Then to Washington state, where a third child was born -soon after in 1958 they returned to Albion, where, soon after, a forth child was born. Moving produced children, apparently. David Stuart died early, in 1961 leaving her 4 children to raise, the youngest a 2 year old baby. She devoted the next 18 years raising her 3 boys and daughter. In her later years ,after all children were grown, she followed her eldest son to the Greenville, Texas area. She lived in Caddo Mills, Texas, and after retiring from a second career working in the hospital in Greenville, moved to Greenville and later Royse City. Mary was a devout Baptist. Mary is survived by son and daughter in law, David and SueAnn Stuart of Texas; son, Kevin Charles Stuart of China; son and daughter in law, James and Danette Stuart of Utah; daughter, Judith Elaine Livingston of Minnesota.; fourteen grandchildren, who lovingly referred to her as Granny. Mary was proceeded in death by her parents and husband, David Stuart. Services will be Wednesday, December 11th, 2019 in McCarn Funeral Home Chapel with Bro. Mark Cook officiating. Interment will follow at Albion Cemetery in Albion, Oklahoma. Services are under the direction of McCarn Funeral Service of Talihina, Ok.

Mary Elizabeth Stuart went home on December 6th, 2019 in Waco, Texas at the age of 91. Mary was born on January 20th, 1928 to Algernon and Nona (Jackson) Angwin in Albion, Oklahoma. Mary lived in the Albion area, where she raised 4 children... View Obituary & Service Information

The family of Mary Elizabeth Stuart created this Life Tributes page to make it easy to share your memories.

Send flowers to the Stuart family.