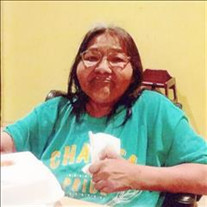 Mary Lou James Meashintubby was born on January 10th, 1950 to Lena Ruth (Samuel) and Junior Ray James in Honobia, Oklahoma. She lived in the Talihina area most of her life. She was a native Choctaw and very proud of her heritage. Mary Lou... View Obituary & Service Information

The family of Mary Lou James Meashintubby created this Life Tributes page to make it easy to share your memories.

Send flowers to the Meashintubby family.