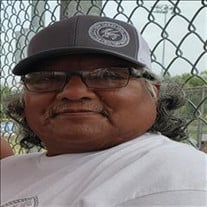 Luther "Eugene" James, age 65 of Tulsa, Oklahoma, passed away on December 4th, 2020 in Springfield, Missouri. Eugene was born on July 25th, 1955 to Lena Ruth (Samuel) and Junior Ray James in DeQueen, Arkansas. Eugene lived in Tulsa most of his life. He was an avid sports fanatic, loved OU football, fastpitch softball and many other sports. He played fastpitch softball with the Talihina Choctaws, and they called him "Tiny" because he was fast and mighty. Eugene was a very caring, unselfish person who would give his last dollar to help someone in need. His pride and joy was his grandchildren. He would attend any sporting or school event they were involved in and be the first one cheering them on. Eugene will be deeply missed by all who knew him. Eugene is survived by his daughter, Wynona Gipson and husband Scott of Tulsa, OK; son, Shawn James and Tanya Lowe of Tulsa, OK; son, Vance James of Tulsa, OK; step children, Vanessa Cooper of Tulsa, OK and Dana Swake of Tulsa, OK; grandchildren, Lauren Billie, Kaitlyn Gipson, Sadie Hernandez, Honda Figueroa, and Nathaniel James; wife, Louetra Swake; siblings, Mary Lou Meashintubby of Talihina, OK, Richard James of Tulsa, OK, Calvin James of Tahlequah, OK, Brenda Trejo of Poteau, OK, Doretha James of Tulsa, OK, Paul Samuel of Hugo, OK, and Nelson Samuel of Smithville, OK. Eugene is preceded in passing by his parents, brother, Mitchell James and sister, Martha James. Family visitation will be on Wednesday, December 9th, 2020 from 6:00 PM to 8:00 PM at Dighton-Moore Funeral home in Owasso, Oklahoma. Graveside Services will be on Friday, December 11th, 2020 at 2:00 PM at Rock Creek Cemetery in Honobia, Oklahoma with Bro. Donald Ludlow officiating. Services have been entrusted to McCarn Funeral Service of Talihina, Oklahoma.

The family of Luther Eugene James created this Life Tributes page to make it easy to share your memories.

Send flowers to the James family.