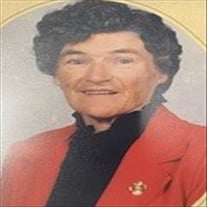 Lois Lavon (Erwin) Goodson, age 93 of Nashoba, Oklahoma, passed away from this life on October 17th, 2021 in Altus, Oklahoma with her family by her side. "Tinker" as everyone knew her, was born on May 20th, 1928 to Mandy Jane (Scarberry) and Buck Erwin in Nashoba, Oklahoma and she lived there most all her life. She married Edward A. Johnson on May 2nd, 1947 and they had one son, Edward. After his passing in April of 1949, Tinker remarried Curtis E. Goodson on May 7th, 1957 and they had three boys, Mike, Jerry, and Bobby. Curtis later passed away in January of 1989. Tinker enjoyed gardening and visiting with family and friends. She was a member of the Nolia Assembly of God church. She will be dearly missed by all who knew her. Tinker is survived by her sons, Edward Johnson and wife Maxine of Valiant, OK, Mike Goodson of Martha, OK, Jerry Goodson of Martha, OK, and Bobby Goodson of Granite, OK; sister, Doris Wright of Nashoba, OK; grandchildren, Shandra, Shelley, Brooke, Jessica, Katy, Karen, Lavon, Mandy and Curtis; numerous great grandchildren as well as many nieces, nephews, cousins and a host of friends. Tinker is preceded in passing by her parents, Mandy and Buck Erwin; daughter in law, Brenda Goodson; brothers, Leroy Erwin and wife Lois, and Paul Erwin and wife Sue. Pallbearers will be Randall Erwin, Mark Erwin, Roger Wright, Roger McDaniel, Shannon McDaniel, and OD Scarberry. Visitation will be on Wednesday, October 20th 2021 from 3:00PM to 7:00PM at McCarn Funeral Chapel in Clayton, Oklahoma. Graveside services will be on Thursday, October 21st, 2021 at 2:00PM at Nolia Cemetery in Nashoba, Oklahoma with Kristi Gee officiating. Services have been entrusted to McCarn Funeral Service of Talihina, Oklahoma.

Lois Lavon (Erwin) Goodson, age 93 of Nashoba, Oklahoma, passed away from this life on October 17th, 2021 in Altus, Oklahoma with her family by her side. "Tinker" as everyone knew her, was born on May 20th, 1928 to Mandy Jane (Scarberry) and... View Obituary & Service Information

The family of Lois Lavon Goodson created this Life Tributes page to make it easy to share your memories.

Send flowers to the Goodson family.