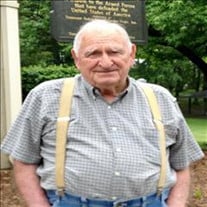 Lerton (LC) Clements Goodrich Jr. was born on February 20th, 1925 in Dallas, Texas to Delia (Gawne) Goodrich and Lerton Goodrich Sr. He joined the U.S. Navy and served in the Pacific Theater on board the USS Sitkoh Bay as an Aviation Ordnanceman 3rd Class, later in a land based naval squadron in the South Pacific. LC loved to deer and turkey hunt, go fishing, raise cattle, and he enjoyed raising his bird dogs, but most of all he loved spending time with his family. After the war, he went to work for Dr. Pepper painting billboards and he went to work painting houses. He painted homes of many prestigious people in the Dallas, Texas area and was known for his ability as a home decorator and could match any color. LC later built his retirement home in Whitesboro, Oklahoma and semi retired while still traveling back and forth to Dallas to paint homes. He also had a paint and wallpaper store in Talihina. He served on the Republican National Committee for Donald Trump. Being a WWII Naval Veteran, recently was able to participate in the Oklahoma Honor Flight to Washington D.C with his granddaughter Lesley Shaw as his escort. LC also served on the Whitesboro District #3 Water Board and assisted in forming a community garden with his local church family. Living to a wonderful age of 95 years, LC Goodrich will be missed by all who knew him. LC is survived by his children, Larry Wayne Goodrich of Whitesboro, OK, Ricky Dean Goodrich and wife Bernetta of Talihina, OK, and Denise and Tommy Little of Fort Worth, TX; 15 grandchildren; 35 great grandchildren; 10 great great grandchildren and one brother, Jerry Wayne Goodrich and many nieces, nephews, and cousins. LC is preceded in death by his parents, wife, Billie Pearl Morris Goodrich; daughter, Shirley Marie and husband Thomas Charles McCurdy, daughter, Janet Kay and husband Lyndon Hood, great grandson, Allan Hood, and sister Dorothy Lenhart. Visitation will be on Sunday, April 26th, 2020 from 10AM to 12PM at McCarn Funeral Service in Talihina, Oklahoma. Please keep in mind of only 10 people in the facility at one time. Graveside services will be on Sunday, April 26th, 2020 at 2:00PM with Bro. Charles Parker and Bro. Jeffrey Hood officiating at Whitesboro Cemetery. Services are under the direction of McCarn Funeral Service. Please be in mind of the social distancing rule and allow no more than 10 people and stay 6ft. apart.

Lerton (LC) Clements Goodrich Jr. was born on February 20th, 1925 in Dallas, Texas to Delia (Gawne) Goodrich and Lerton Goodrich Sr. He joined the U.S. Navy and served in the Pacific Theater on board the USS Sitkoh Bay as an Aviation Ordnanceman... View Obituary & Service Information

The family of Lerton Clements Goodrich, Jr. created this Life Tributes page to make it easy to share your memories.

Send flowers to the Goodrich family.