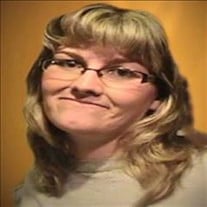 Lavenia Elizabeth Ann (Stewart) Lickly, age 40 of Talihina, Oklahoma, passed away from this life on Friday, September 17th, 2021. "Elizabeth" was born on September 14th, 1981 to Paula Marie (Brent) and Francis Warren Stewart in Grand Saline, Texas. She married Keith Lickly on March 6th, 2007 in Fort Smith, Arkansas. Elizabeth worked as a teachers aide at the Headstart in Talihina and was very fond of all the children as they were of her. She had five children of her own that were her pride and joy. She enjoyed chasing them all around to all of the different activities they were all involved in. Elizabeth was known for being a helpful person, she went out of her way to lend a hand to anyone she knew. She was also an avid sports fan, OU, Kansas City Royals, and Kansas City Chiefs being her favorite teams. She enjoyed being outside, party planning, and most of all spending time with her family. She will be deeply missed by all who knew her. Elizabeth is survived by her husband, Keith of the home; children, Jon Grogan, Walker Bruce, Scott Bruce, Marie Lickly, and Kaylee Lickly; mother, Paula Stewart of Talihina, OK; brothers, David Stewart of Blanchard, OK, Kenneth Stewart of Sherman, TX, Dennis Stewart of Corinth, TX, Thomas Stewart of Canton, TX, and Donny Stewart of Dallas, TX; mother and father in law, Doug and Karen England; aunts, Shirley Brent of Wichita Falls, TX, and Theresa Brent of Canton, TX, as well as many nieces, nephews, cousins and large extended family. Elizabeth is preceded in passing by her father, Frank Stewart and sister, Dana Harwell. In lieu of flowers, the family has requested donations to be made to the account set up at Community State Bank in the name of Keith Lickly for the children's college fund. Honorary Pallbearers will be AJ, Marcus, Paul, Michael, Tim, Nathan, Jakob, Travis, Levi, Josh, Ryan, Kyle, Jaydee, James, Michael, Aiden, Gabriel, and Benjamin. Private family graveside services will be on Thursday, September 23rd, 2021 at 10:00AM at New Talihina City Cemetery with Bro. Carrol Fitzgerald officiating. Services have been entrusted to McCarn Funeral Service of Talihina, Oklahoma.

The family of Lavenia Elizabeth Ann Lickly created this Life Tributes page to make it easy to share your memories.

Send flowers to the Lickly family.