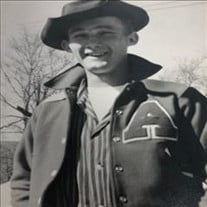 Lamon Willard Roberts, age 80, of Tuskahoma, Oklahoma passed away from this life on Saturday, June 20th, 2020 at his home with his family at his side. Willard was born on August 8th, 1939 near Albion, Oklahoma to Joe Cephas Roberts and Edith... View Obituary & Service Information

The family of LAMON WILLARD ROBERTS created this Life Tributes page to make it easy to share your memories.

Send flowers to the ROBERTS family.