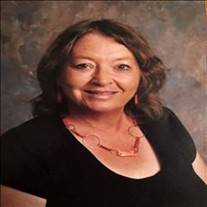 Kay Lynn (Katie) Poe was born in Pampa, TX, June 23 1957. She left us February 1st, 2022. Those who made this journey ahead of her include her husband, Michael Poe; one infant child; one infant grandchild; her natural father, Earl Hollingsworth; and the dad she grew up with, Chester Cooley. She leaves behind four children and their spouses, Matthew and Laura Poe of Ringling, OK, Kristoffer and Jessica Poe of Fort Hood, TX, Kassandra and Jesse Kilcrease of Ratliff City, OK, and Benjamin and Amanda Poe of Fort Benning, GA; ten precious grandchildren, Ryker, Ryder and Ryler Poe of Ringling, OK, Natalie and Audrey Poe of Fort Hood, TX, Noah, Brynlee and Jentry Kilcrease of Ratliff City, OK, Noah and Vivian Poe of Fort Benning, GA; one brother and sister in law, Vernon and Misty Cooley and their children, Sarina and Jackson of Tulsa, OK; her mother, Helen Cooley of Buffalo Valley, OK and too many well-loved friends to name. The extended family members include, uncles, aunts, nieces, nephews, and cousins who were as close to her as siblings. Katie is also survived by the many young people she taught at both Fox and Buffalo Valley schools. This was her first year of retirement, and she missed most of all being with her students every day. A major stroke four years ago began her rapid decline in health. She loved her work so much that she tried to keep working long after she was no longer able to. She always set a high standard for her students, and was proud of them when they lived up to her expectations. Katie believed that being from a rural school did not mean that one had to enter life ignorant. Katie spent her childhood as a preacher's kid, living in several Assemblies of God parsonages over the years. She came to salvation at a very early age, being baptized in water when she was eight. As a teenager, she served as a counselor to children's church camp. As an adult, she gave her dad the best compliment he ever received; she told him that she hadn't always agreed with his strict rules, but she did always know that he had her best interest at heart. Even though she didn't agree with all the family rules, she lived by them and never behaved in a way to make her parents ashamed. She graduated from Dustin High School as class Valedictorian. She met Mike at Connors State College, and they were married July 31, 1976. He was in the U.S. Army, and their early married life was spent at Fort Sill, OK. After military discharge, the family moved to Ketchum, OK, where Katie as a working mother of four children,became a college student. Throughout her college years, she kept herself to the same high standard she had kept in high school; anything less than a perfect grade was just unacceptable. She earned a Bachelor's Degree and became a teacher; later, she added a Master's Degree in counseling. Her husband worked in the Engineering Department at Valero Refinery in Ardmore, so she began teaching near there, at Fox, OK. After Mike's death, she came back to the place she considered home and spent her later years in Buffalo Valley School. She considered her children and grandchildren her greatest accomplishment and greatest joy in life. She made every effort to attend grandchildren's school and sports activities. Katie was always their biggest fan in whatever they chose to do. Her prayers and support will be greatly missed by the family. (Proverbs 31:28 and 31:30) Her children arise up, and call her blessed; her husband also, and praiseth her....Favour is deceitful, and beauty is vain: but a woman that feareth the Lord, she shall be praised. Visitation will be on Monday, February 7th, 2022 from 4:00PM to 7:00PM at McCarn Funeral Service in Talihina, Oklahoma. Services will be on Tuesday, February 8th, 2022 at 2:00PM at the Talihina Assembly of God Church with Rev. Vernon Cooley officiating. Interment will follow at Laura McGee Cemetery in Buffalo Valley, Oklahoma. Services have been entrusted to McCarn Funeral Service of Talihina, Oklahoma.

Kay Lynn (Katie) Poe was born in Pampa, TX, June 23 1957. She left us February 1st, 2022. Those who made this journey ahead of her include her husband, Michael Poe; one infant child; one infant grandchild; her natural father, Earl Hollingsworth;... View Obituary & Service Information

The family of Kay Lynn Poe created this Life Tributes page to make it easy to share your memories.

Send flowers to the Poe family.