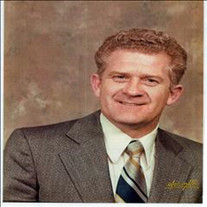 Jesse Ray "J.R." Wetwiska, 84, of Lexington, Texas was called home to be with the Lord on Friday, April 3rd, 2020. He was born June 18th, 1935, in Shawnee, OK to John and Mary (Wesley) Wetwiska. His family included 7 sisters and 9 brothers. J.R. is preceded in death by his parents, most of his siblings and his youngest daughter, Cecilia. He is survived by his true love, his wife of 64 years, Betty and devoted eldest daughter, Kay. He left behind a large family and many friends. J.R. served with honor as a US Marine Corporal in the Korean War. After discharge from the service, he then became happily married to the love of his life, Betty Anderson on February 11th, 1956. They moved to Dallas for a year, then moved to Houston, TX where he went to work for 29 yrs at Hydril Co., an oil and gas company, as a machine/CNC operator (pipeline). He attended Houston Community College for 2 yrs. He also owned J.R. Wetwiska, Inc. Air Conditioning and Heating for 35 yrs, servicing residential and commercial with much time in new construction. He loved to work. J.R.'s mother, Mary, nicknamed him "her Genius" because he could fix almost anything, a sentiment held by his customers. He was known as a hard working, honest and giving man with a generous spirit and a contagious smile and a laugh to match. For being of good service to others, he won the Good Guy award from KPRC News in Houston in 1993. He exceeded expectations and inspired so many others, be it family, employees and friends to be and do their best. J.R. and Betty moved to Lexington, TX in 1998 where he became a builder, after building his own home, one of greatest achievements and keeping a promise to his wife, he then retired. He had a deep faith and loved God and his country, enjoyed church, fishing, spending time with his family (which was his favorite thing to do) and traveling. Marines are taught to improvise, adapt and overcome. He did all 3 well, honed them to a fine skill, especially in the last few years of his life. Where most would have succumbed to the few maladies his body was burdened with, even when told it was the end quite a few times, his doctors would call him the "comeback kid", a miracle, as he kept overcoming and joyfully greeting yet another day with the help of his strong love for family and God. As his physical health deteriorated, his daughter became his caretaker so he could live out his days at home. He never complained, he was so considerate to all, he worried he might impose so he wouldn't bother asking for anything when he probably should have, even when he had plenty of reason to be unhappy, he would smile and try to make you smile even though your heart was aching, seeing him smile made you feel everything was going to be alright. An amazing man of such courage and conviction, chivalry was a habit for him, a gentleman through and through, right to the end. His last words were, thank you. A grateful and humble man. He was one of a kind. He will always be deeply loved and deeply missed. Visitation will be held on Thursday, April 16th, 2020 from 2-6PM at McCarn Funeral Service in Talihina, Oklahoma. Please be in mind, no more than 10 people in the facility at one time under the Governor's Order. Celebration of life service will be on Friday, April 17th, 2020 at 3PM at Cupco Cemetery in Yanush, Oklahoma with Rev. Jerry Anderson officiating. Services have been entrusted to McCarn Funeral Service of Talihina, Oklahoma.

The family of Jesse Ray Wetwiska created this Life Tributes page to make it easy to share your memories.

Send flowers to the Wetwiska family.