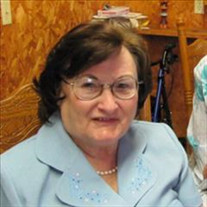 Janette King was born on October 22, 1938 to parents McKinley "Mack" and Pearlie Garrett (Mattox) in Yanush, Oklahoma along with her twin sister, Annette. The girls were raised with their four brothers; older brothers Junior and Dewey and younger brothers Jimmy and Curtis Garrett. Janette graduated from Buffalo Valley High School. Janette married Dale Fergerson in her early twenties and together they had three children, Cindy, Kevin, and Gina. Cindy graduated from college with a degree in Accounting and is a CPA while Gina entered the field of nursing as a Registered Nurse. Kevin, who has many fond aviation memories with his father, a pilot, went into the field of Aviation as a Commercial Pilot, Captain, as well as a Check Airman with Southwest Airlines. Although times were surely extremely difficult after becoming a widow in her 30's, Janette and Dale left a strong legacy with their three children. Janette pursued several career paths before landing in the medical field as a Pharmaceutical Technician. She also owned and operated the Yanush Store for approximately 10 years before eventually becoming a Licensed Practical Nurse. In 1999, Janette married Jessie Gerald King, who coincidentally she and her siblings had actually known since childhood, growing up together in Buffalo Valley. Upon retirement, Janette loved gospel music, cooking, and watching her "stories" or Soap Operas, on TV in the afternoon. She is preceded in death by her parents, brothers Junior, Dewey, and Curtis and Dale Fergerson. Janette is survived by husband, Gerald King, her twin sister, Annette Smith and brother, Jimmy Garrett along with children Cindy (Fergerson) and Matt Wheatley of Yukon, Kevin and Chere' Fergerson of Tulsa and Gina (Fergerson) and Kevin Morris of Oklahoma City. Additionally, Janette is survived by five grandchildren; Mallori, Alex, Preston, Sydney, and Colin as well as great grand-daughter, Ripley, daughter of Mallori and Harrison Stender, along with many beloved nieces and nephews. Services will be at 2:00 PM on Monday, January 20th, 2020 at Cupco Freewill Baptist Church with Bro. Rodney Tate officiating. Interment will follow at Cupco Cemetery in Yanush, Oklahoma. Services have been entrusted to McCarn Funeral Service of Talihina, Oklahoma.

Janette King was born on October 22, 1938 to parents McKinley "Mack" and Pearlie Garrett (Mattox) in Yanush, Oklahoma along with her twin sister, Annette. The girls were raised with their four brothers; older brothers Junior and Dewey and younger... View Obituary & Service Information

The family of Janette King created this Life Tributes page to make it easy to share your memories.

Send flowers to the King family.