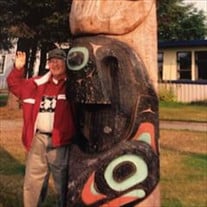 James Patrick "Pat" Blankenship passed from this life on June 17th, 2019 in Oklahoma City, Oklahoma at the age of 82. Pat was born on October 6th, 1936 to John Spencer and Nancy Pearl Wagner Blankenship in Oklahoma City, Oklahoma. Pat married Lavonda Franklin on December 16th, 2000 in Tuskahoma, Oklahoma. Pat was proud to serve his country in the U. S. Army. He loved to hunt, fish and run his equipment around the farm. He also liked to play cards where he never lost, many family and friends would say he may have exaggerated the rules to his favor. Pat is survived by his wife, LaVonda, of the home; one daughter, Janet Blankenship Dragoo of McKinney, Texas; three grandchildren, Carson, Kyle and Courtney Dragoo, all of McKinney, Texas; one great grand- child, Tanner James Blankenship and a host of nieces, nephews and cousins Pat was proceeded in death by his parents; his first wife, Loretta Blankenship; son, Thomas "Tom" Blankenship; two brothers, John Blankenship Jr. and Charles A. Blankenship, and one sister, Willie Mae McNatt. Services will be Wednesday 19th, 2019 at the First Baptist Church of Albion, Oklahoma, with Bro. Darren Goode officiating. Private interment will follow at Old Town Cemetery in Tuskahoma, Oklahoma. Pallbearers will be David Calhoun, Dennis Heflin, Billy Knapp, Gerald Knapp, Bryan Mings and Frank Coleman Services has been entrusted to McCarn Funeral Service of Talihina, Oklahoma.

The family of James Patrick Blankenship created this Life Tributes page to make it easy to share your memories.

James Patrick &quot;Pat&quot; Blankenship passed from this life on June...

Send flowers to the Blankenship family.