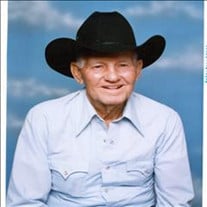 Ira "Ike" Humphreys, age 88 of Muse, Oklahoma passed away from this life on December 26th, 2021. Ike was born on July 21st, 1933 in Whitesboro, Oklahoma to Lillie (Mendenhall) and Ira Humphreys. We read books and hear stories about the last of the real cowboys, but Ike really was the last of the real cowboys. Since he was a young boy, he could ride anything with hair. He rode bulls for a short time in his younger days finding out tame horses were easier to ride, but race horses became his passion. Ike was always a rancher, but he always had horses that he raised and trained to race on the track. Nearly every one of them were going to be a winner, but that never happened. Ike never missed an opportunity to ride in the parade and never missed a Talihina rodeo either. Ike liked everyone, but you only liked Ike if you could tolerate hearing the truth, "Ike's way" with a string of choice words. Ike was everybody's uncle, that's what everyone called him, Uncle Ike, related or not. Everywhere Ike went he had a story to tell about you or one of your friends or relatives. He knew everyone far and wide, but actually more, people knew him than he knew them. If you visited Ike at his home, you were always offered a cup of coffee, a cigarette, and a drink of apricot brandy. Ike had a nickname for everyone, mainly because he couldn't remember their name but he was always able to remember the name he gave them. Ike retired from the US Forestry service after 41 years of service. He talked about the friends and experiences they had for years. Ike will truly be missed, but the stories he told will last a lifetime. Ike is survived by his wife, Terry of the home; two daughters, Lara Crank and husband Cody of Talihina, OK, and Lashay Burns and husband Bobby of Talihina, OK; six grandchildren, Shali Bridges, Kali Bridges, Justin Crank, Bobby Burns, Jackie Burns, and Bruce Burns; two great grandchildren, Dexter and Haven; one brother, George Humphreys and wife Nona of Muse, OK; special friends, Danny and Ann Orand of Wister, OK as well as numerous nieces, nephews, and a host of friends. Ike is preceded in passing by his daughter, Vickey Humphreys, parents, four brothers, and five sisters. Pallbearers are Danny Orand, Paul Dorsey, Doug Morgan, Roy Culley, James Harrison, and Lamon Roberts Honorary Pallbearers are Billy Culley, Duane Culley, Tom Putman, Gary Howard, Gary Wall and Rusty Barron Graveside services will be on Wednesday, December 29th, 2021 at 2:00PM at Talley Cemetery in Talihina, Oklahoma with Bro. Mike Barron officiating. Services have been entrusted to McCarn Funeral Service of Talihina, Oklahoma.

Ira "Ike" Humphreys, age 88 of Muse, Oklahoma passed away from this life on December 26th, 2021. Ike was born on July 21st, 1933 in Whitesboro, Oklahoma to Lillie (Mendenhall) and Ira Humphreys. We read books and hear stories about the last... View Obituary & Service Information

The family of Ira "Ike" Humphreys, Jr. created this Life Tributes page to make it easy to share your memories.

Ira &quot;Ike&quot; Humphreys, age 88 of Muse, Oklahoma passed away from...

Send flowers to the Humphreys family.