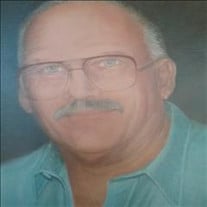 Harry Daniel Nix, age 83, of Tuskahoma, Oklahoma passed away on February 22nd in McAlester, Oklahoma. "Dan" was born on February 12th, 1938 in Dallas Texas to Lillian Alta (Webb) and Ollie Dennie Nix. He served his county proudly in the U.S. Army and Coast Guard and then went to work in construction. He married the love of his life, LaDale Bryant, in Fort Smith, Arkansas on May 24th, 1996. Dan was a member of the Baptist Church and loved the Lord. Dan will be dearly missed by all who knew him. Dan is survived by his wife, LaDale of the home; children, Danita Kay Nettle of Dallas, TX, Danny Nix Jr., Dena Louise Dice, Elizabeth Ann Nix of Jackson, GA, and Leah Williamson and husband, Nolan of Fayetteville, AR; numerous grandchildren, great grand children, and great great grandchildren; as well as many nieces, nephews, cousins, in laws, and numerous friends. Dan is preceded in death by his parents, Ollie and Lillian Nix; brothers, Russell Nix, Richard Nix, and Robert Nix; and son, Cary Daniel Nix. Graveside services will be on Friday, February 26th, 2021 at 11:00 AM at New Talihina City Cemetery in Talihina, Oklahoma with Bro. Pete Heflin officiating. Services have been entrusted to McCarn Funeral Services of Talihina, Oklahoma.

The family of Harry Daniel Nix created this Life Tributes page to make it easy to share your memories.

Send flowers to the Nix family.