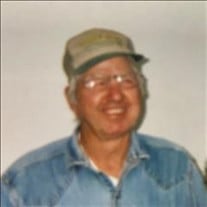 Freddie Roy Hoglan, age 87 of Talihina, Oklahoma, passed away from this life on May 27th, 2021 at his home with his family by his side. Freddie was born on February 27th, 1934 to Cora Etta (Pierce) and William "Cap" Hoglan in Magnolia, Texas. Freddie proudly served his country in the U.S. Army from 1952 - 1960. He was a licensed plumbing contractor and owned and operated Hoglan Repair Center. He was a hard worker, and believed in an honest day's labor. He was talented in the mechanical aspect and could make anything run. Freddie enjoyed bailing hay, and working, but most of all, spending time with his family. He married Ina Ruth (Sulzer) in August of 1960 and they spent over 60 years by each other side. A true definition of devotion, they were inseparable. Freddie will be deeply missed by all who knew him. Freddie is survived by his wife of the home; daughters, Kathy Davenport and Sandra Johnson and husband Rowdy; grandchildren, Jason Lee Baggs and wife Amber, Jarred John Baggs and wife Temper, Jeremiah Roy Hoglan Johnson and wife Heather, Jayla Marie Kathleen Johnson; great grandchildren, Kason Lee Baggs, Hazelee Paige Baggs, Zayden Lane Baggs, Easton Cade Baggs, Bear Myles Baggs, Camara Marie Johnson, Katie Rose Johnson, Jase Ryker Johnson, Jakota Grammar, Remington Rodeck, and Lakilynn Rodeck as well as many nieces, nephews, cousins and a host of friends. Freddie is preceded in passing by his parents, and siblings, Hazel Florene, Gertie Fay, Rosilee, Arvel Leo, Kirk Robert, Jessie Elvin Eugene, Bessie Alva Mozelle, Velma Lucille, Charlene Catherine, Eddie Ray, Richard "Jim" Wayne and Lonnie David. Visitation will be on Monday, May 31st, 2021 from 4:00 PM to 6:00 PM at McCarn Funeral Service in Talihina, Oklahoma. Services will be on Tuesday, June 1st, 2021 at 2:00 PM at the Assembly of God Church in Talihina, Oklahoma with Bro. Carroll Fitzgerald and Bro. John Stepp officiating. Interment will follow at Old City Cemetery in Talihina, Oklahoma. Services have been entrusted to McCarn Funeral Service of Talihina, Oklahoma.

Freddie Roy Hoglan, age 87 of Talihina, Oklahoma, passed away from this life on May 27th, 2021 at his home with his family by his side. Freddie was born on February 27th, 1934 to Cora Etta (Pierce) and William "Cap" Hoglan in Magnolia, Texas.... View Obituary & Service Information

The family of Freddie Roy Hoglan created this Life Tributes page to make it easy to share your memories.

Send flowers to the Hoglan family.