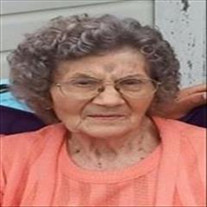 Evelyn S. Marshall, age 102 of Talihina passed away from this life on Tuesday, December 7th, 2021. She was born on May 14th, 1919 in Rock Island, Oklahoma to Pearl (Clark) Shuler and Burl Shuler. She grew up in Poteau, Oklahoma where she attended school and later went on to St. Edwards nursing school in Fort Smith to achieve her Registered Nursing license. She moved to Talihina, OK to work in the Tuberculosis Hospital and later went to become a surgical nurse at Choctaw Nation Hospital. After her retirement, she worked part time as a charge nurse at the Talihina Nursing Home. Even after retiring, she never stopped being a nurse. Caring for people and helping those in need was her passion and she made an impact on countless lives because of it. In May 1944, she married the love of her life, Nat Marshall and they began their life journey together. They made their home in Talihina where they raised their two children, Nat S. (Sammy) and Linda Kay. Nat and Evelyn were married for 66 years until his passing in 2010. Evelyn was an active member in the Eastern Star and VFW Ladies Auxiliary. Evelyn is survived by her daughter, Linda K. Holland of Talihina, OK; grandchildren, Patty Robbins and husband Virgil of Talihina, OK, Brian Holland and wife Kallie of Talihina, OK, Gina Walker and husband Steve of TX, Natalie Stacy and husband Scott of Wilburton, OK, Jeff Marshall and wife Cherish of Wilburton, OK, Richard Sonaggera and wife Kathy of Wilburton, OK; great grandchildren, Justin, Becca, Riley, MaKayla, Makenna, Jaylee, Lexie, Roy, Clayton, Emma, James, Kate, Ryan, and Maddie; four great great grandchilren, as well as numerous nieces, nephews, and a host of extended family, Evelyn is preceded in passing by her parents, siblings, husband, Nat Marshall Jr., son, Nat S. Marshall, grandson, E.C. Lawson, and a great granddaughter, Reagan Sonaggera. Pallbearers are Brian Holland, Jeffery Marshall, Ryan Marshall, Scott Stacy, Clayton Lawson, Steve Walker. Honorary Pallbearers are Jon Alan Marshall and Richard Sonaggera Visitation will be Monday, December 13th, 2021 from 5:00PM to 7:00PM at McCarn Funeral Service in Talihina, Oklahoma. Graveside services will be on Tuesday, December 14th, 2021 at 10:00AM at New Talihina City Cemetery with Bro. Mark Cook officiating. Services have been entrusted to McCarn Funeral Service of Talihina, Oklahoma.

Evelyn S. Marshall, age 102 of Talihina passed away from this life on Tuesday, December 7th, 2021. She was born on May 14th, 1919 in Rock Island, Oklahoma to Pearl (Clark) Shuler and Burl Shuler. She grew up in Poteau, Oklahoma where she... View Obituary & Service Information

The family of Evelyn Marshall created this Life Tributes page to make it easy to share your memories.

Evelyn S. Marshall, age 102 of Talihina passed away from this...

Send flowers to the Marshall family.