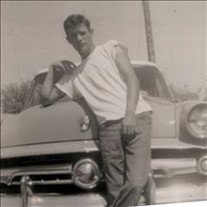 Eugene Hamilton was born on July 11th, 1933 to Mattie and Goldie Hamilton in Buffalo Valley, Oklahoma. Eugene liked to hunt and fish and ride the four-wheeler to check cows. He worked at the Talihina Veteran's Center for many years. He also... View Obituary & Service Information

The family of Eugene Hamilton created this Life Tributes page to make it easy to share your memories.

Send flowers to the Hamilton family.