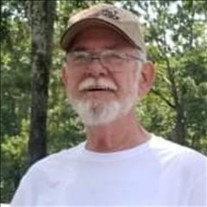 Elmer Eugene Morris was born on September 8th, 1950 in Oklahoma City, Oklahoma. Elmer passed away from this life on December 2nd, 2021. He is survived by his wife, Mona Morris of Talihina, OK; daughter, Misty Leigh Morris of Talihina, OK; son, Lyndel Morris of Talihina, OK; grandsons, Colten Chance Ybarra and wife, Chastain Ybarra of Talihina, OK, Johnathan Riley Davis of Lavaca, AR, and Chase Allen Davis of Lavaca, AR; great granddaughters, Lilah Davis of Pocola, OK, and great grandson, Jaxton Riley Davis of Ozark, AR, and soon to be great granddaughter Maven Grace Ybarra; brother and sister-in-law, Les and Rita King of Talihina, OK. Elmer was known by "Gene or Eugene" by friends and family, all were very important to him and a big part of his life. Special friends were Earl Bain of Jones, OK and Danny Standefer of Clayton, OK. He considered both to be like brothers and shared many good times with them. Gene enjoyed playing pool and spending time with his friends. He worked for the Painters Union for over 30 years and later went on to open a bar in Oklahoma City. After that, he moved to Talihina and retired where him and Mona built their new home. Elmer is preceded in death by his father, Elmer L. Morris; mother, Lera Morris; and son Wayne Allen Davis. Jesus promised a resurrection of the righteous and unrighteous so our hope is to see him again. A memorial service will be held on Sunday, December 19th, 2021 at 1:00PM at the Talihina Community Center. Services have been entrusted to McCarn Funeral Service of Talihina, Oklahoma.

The family of Elmer Eugene Morris created this Life Tributes page to make it easy to share your memories.

Elmer Eugene Morris was born on September 8th, 1950 in Oklahoma...

Send flowers to the Morris family.