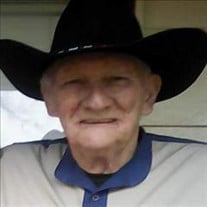 Ernest Richard Parks, was born on October 6, 1939 and passed on July 8, 2021 at home. His parents were Della Ona (Tillman) Parks and Lewis Granville Parks, in Holdenville, OK. He weighed only three pounds and spent the first months of his life in a chicken incubator (medical practices being what they were back then). He spent his childhood in Yeager, OK, but family moved to Clayton, OK in 1946. He went to grade school in the Bevan's one room school house and graduated from high school in Clayton. A broken little finger kept him from the draft and health issues kept him working at various occupations. Richard became an avid hunter and fisherman, he was active in every season Oklahoma had to offer. If it was hunting season, he shot something. If the weather was right for fishing, Richard was on some lake, pond or river bank bring in the big ones. If trapping, he would walk miles to set traps. Richard took a youth group on the hunt every Youth Weekend in deer season. This was the highlight of his year. In his spare time, Richard loved anything western books, movies and music. He also loved to write poems and funny stories of his childhood that may or may not have been embellished a bit. Richard is survived by his son Kenneth Wayne Parks and wife, Tanya of Cleveland, OK; four daughters: Della Peterson and husband, Tim of Ft. Worth, TX; Clara Jenkins and husband, Charlie of Possum Kingdom, TX; Valencia Kindle who will be residing in the home, and Penny French; Son-in-Law Gerald Wood of Farmington, AR; 2 sisters: Mildred Sharpe of Burlington, NC and Johnnie Sue Parks of Clayton, OK.; 13 Grandchildren and 25 Great-Grandchildren and so many nieces and nephews, cousins and friends who dearly loved and will miss him. He is preceded in death by his parents; two daughters: Christi Wood, Sherry Newton; 4 brothers: Rufus Ray, Lewis Vernon, Everett Paul and Kenneth Jack; 1 sister: Lillian Virginia Gordon; 2 sisters-in-laws: Leona Parks and Margarite Parks; 3 nephews: Paul Wayne Speers, Johnny Glenn Speers and Stephen Lewis Speers; 3 nieces: Judith Curtis. Jan Dees and Marlene Speers. Pall Bearers are: Charlie Farmer, Michael Hilliard, Jimmy Taylor III, Austin Wood, Christopher Wood and Gerald Wood. Visitation will be on Monday, July 12th, 2021 from 5:00PM to 8:00PM at McCarn Funeral Chapel in Clayton, Oklahoma. Graveside services will be on Tuesday, July 13th, 2021 at 2:00PM at AL Stephens Cemetery in Clayton, Oklahoma.

Ernest Richard Parks, was born on October 6, 1939 and passed on July 8, 2021 at home. His parents were Della Ona (Tillman) Parks and Lewis Granville Parks, in Holdenville, OK. He weighed only three pounds and spent the first months of his life... View Obituary & Service Information

The family of Earnest Richard Parks created this Life Tributes page to make it easy to share your memories.

Send flowers to the Parks family.