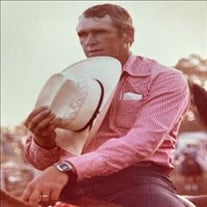 Douglas Gale Huddleston, age 82, of Clayton, Oklahoma passed away on April 19th, 2021 at his home with his family by his side. "Doug" was born on July 12th, 1938 in Sardis, Oklahoma to Gladys (Ayers) and Benjamin Huddleston. He married Betty Pugh in Antlers, Oklahoma and they spent more than fifty years together before her passing in 2013. Doug was a school teacher by profession but his heart was in coaching, he loved coaching basketball. He took pride in his kids and teaching them not only about sports, but life lessons as well. Doug also had a passion for rodeos, and was a stock contractor and owner of Triple D Rodeo Co. where he produced many rodeos. He was also a member of the IRA where he served on the board of directors and was named Stock Contractor of the Year 3 times. One of his biggest accomplishments in rodeo was winning the first annual World's Largest Bullridding at the Hardy Murphy Coliseum in Ardmore, OK. Doug gave his heart to the Lord on April 2, 2021. He will be deeply missed by all who knew him. Doug is survived by his children, Vickie Long and husband Jimmy of Clayton, OK and Brian Huddleston and wife Tara of Atoka, OK; three grandchildren, Jeffery Long and wife Jessica of Yanush, OK, Blake Long and wife Sydney of Clayton, OK, and Hanks Huddleston of Atoka, OK; 6 great grandchildren, Brigham, Shannon, and Alice Long of Yanush, OK, Arayah, Conner and Rylee Long of Clayton, OK.; brother, Don Huddleston and wife Joye; sister in law, Billie Huddleston and Betty Huddleston; brother in law, Vaugh Pugh and wife Marlichia and Otis Pugh and wife Carolyn; as well as many nieces, nephews, cousins and a host of friends. Doug is preceded in death by his parents, Benjamin and Gladys Huddleston; wife, Betty Huddleston; brothers, Dale and Dennis Huddleston; sisters, Ida Venable, Auda Lewis, Lois Haynes, and Betty Northcutt. Pallbearers will be Bud Smith, Larry Bell, Jerry Blackburn, Gary Huddleston, David Holt, Hanks Huddleston, Jeffery Long and Blake Long Honorary Pallbearers will be Amy Payne, Buford Lockhart, Bob Holt, Billy Caraway, Jan Storey and Hoot Bell. Visitation will be on Wednesday, April 21st, 2021 from 4:00 PM to 7:00 PM at McCarn Funeral Service in Talihina, Oklahoma. Services will be in the Clayton High School Auditorium on Thursday, April 22nd, 2021 at 2:00 PM with Bro. Dustin Grammer and Johnny Long officiating. Interment will follow at Stanley Cemetery. Services have been entrusted to McCarn Funeral Service of Talihina, Oklahoma.

Douglas Gale Huddleston, age 82, of Clayton, Oklahoma passed away on April 19th, 2021 at his home with his family by his side. "Doug" was born on July 12th, 1938 in Sardis, Oklahoma to Gladys (Ayers) and Benjamin Huddleston. He married Betty... View Obituary & Service Information

The family of Douglas Gale Huddleston created this Life Tributes page to make it easy to share your memories.

Send flowers to the Huddleston family.