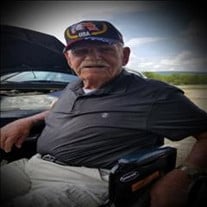 Don Jesse Lanning, long time resident of Talihina and WWII Veteran, departed from this life on June 3rd, 2020 at the age of 96 at the Talihina Veteran's Center, where he had resided for the past 3 years. Don was the eighth of nine children born to Jim B. and Susie (Ashworth) Lanning on March 30th, 1924, in Philips County, Missouri. His siblings were Ansell, Virgil, Earl, Cordie, Chester, Aldoris, Rosella, and Hugo. At age 2, Don's family along with several other related families left Missouri for Oklahoma to find work in the booming timber industry. They settled for a short time in Page, Oklahoma to work in a sawmill. Later Don's family and other related families moved to the Albion area to work in the timber industry. Don's early schooling was at Albion, but like many teenagers of the Post Great Depression Era, Don had to leave school to help earn money for the family. At the age of 16 in 1940, his mom signed the papers, fudging his age, for him to join the U.S. Army. Don served 5 years in which 3 years were active duty in WWII. He served under General Clark in the 5th Army and in General Patton's 7th Army. Don's division landed in North Africa, making their way through Sicily, Italy, Southern France and Germany. Sgt. Don Lanning was a tank driver in the artillery. His division traveled through Giulino, Azzano, Italy and saw the body of Fascist Dictator Mussolini just after his hanging. Don had four brothers also serving in the war. Don said when they came across American causalities, he would look at the toe tags to see if his brothers were among the lost. His brothers all made it home, however while looking through the toe tags of the fallen, he found a childhood friend from Albion. After the war, Don married Lois Evelyn Smith of Albion. Don and Lois lived in Kansas City where he worked for Standard Steel. The couple had two sons, Raymond Dean and Michael Wayne Lanning. In the mid 1950's the family moved back to the Talihina / Albion area where they resided the rest of their lives. Don worked at the TB Sanatorium, a cook at the prison in Hodgens, Talihina Policeman, and the Talihina Veteran's Center from which he retired. Don loved dancing, gardening, fishing and was able to mow his own yard until the age of 93. Don is survived by his son, Raymond Dean and Melanie Lanning; daughter-in-law, Judy Lanning; granddaughters, Kathy and Robbie Boren, Cristy and Roy Rainwater, Misty and Josh Shelton, Ashley and Justin Turney; eleven great grandchildren; three great great grandchildren, special friend, Imogene Harris, two cousins, and numerous nieces and nephews. Don was preceded in death by his parents, seven brothers, one sister, son, Mike Lanning, grandson, Bailey Waller, and great great granddaughter Riley Baker Johnson. Pallbearers will be Robbie Boren, Dakota Boren, Ry Johnson, Roy Rainwater, Andrew Rainwater, Trenton Lanning, and Ethan Webber. Graveside Services will be on Saturday, June 6th, at 10:00 AM at the New Talihina City Cemetery with Reverend Joseph Mullins officiating. Services are under the direction of McCarn Funeral Service of Talihina, Oklahoma.

Don Jesse Lanning, long time resident of Talihina and WWII Veteran, departed from this life on June 3rd, 2020 at the age of 96 at the Talihina Veteran's Center, where he had resided for the past 3 years. Don was the eighth of nine children... View Obituary & Service Information

The family of Don Jesse Lanning created this Life Tributes page to make it easy to share your memories.

Send flowers to the Lanning family.