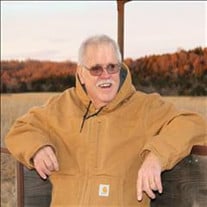 The sun rose for Dickie Joe Bradford on January 29th, 1947. He was 72 and at home with family when the sun set for him on December 25th, 2019. He is survived by his wife of 41 years, Patricia Bradford; their children, Kevin Ganote, Chris Ganote, and Keri Bradford; five grandchildren, nine great-grandchildren; sister Donna Taylor; brothers Turner Lee and Jerry Vales; and many family members across Oklahoma and Arkansas. He is preceded in death by his mother, Lois Vales, and sister, Charlotte Bradford. Born and raised in Little Rock, Arkansas, Dick graduated from Central High School in 1965, and after working in airplane parts manufacturing and as a machinist, he moved to Oklahoma and became a master electrician. In his more than 40 years in the field, he wired and serviced many major structures in Tulsa, including the Civic Center, Oral Roberts University, and nearly every fire and police station in town. He was even featured on the front page of the Tulsa World newspaper, twice, while in uniform repairing city traffic lights. In 2007, Dick retired as an electrician from the City of Tulsa, after 22 years of service. Dick met his wife, Patricia, in 1975, and they were married in 1978, at her mother's house in Talihina, Oklahoma. He helped care for Patricia's young sons, Kevin and Chris, and in 1979, Dick and Patricia's daughter, Keri, was born. Dick was a hard-working and loving provider and an engaged father. For example, Dick learned the Goju-Ryu style of karate, and began teaching it to his children and to a class at a local recreation center. He would go on to earn his black belt at age 50, during a grueling series of tests. Dick loved life and had many interests. After years of teaching karate, he became interested in genealogy and, in honor of his ancestors, he joined a regiment of the Trans-Mississippi army as a Civil War re-enactor, participating in full regalia in battle re-enactments across Oklahoma, Kansas, Missouri, Arkansas, and Tennessee. Dick also enjoyed cooking and later in life, Dick pursued an interest in oil painting and enjoyed working on landscapes. In his final days, Dick was lovingly surrounded by his family, and he asked for the following to be shared: "I wish to have my family and friends know that I love them. I want memories of my life to give them joy, and not sorrow." While it will be impossible for us not to miss his fun-loving and good-natured spirit, and his sweet smile and strong hugs, we are grateful to hold dear so many memories in our hearts. Our family wishes to thank the healthcare providers with Oklahoma Heart Hospital. Pallbearers will be Kevin Ganote, Chris Ganote, Keri Bradford, Aaron Taylor, Christopher Ganote, and Kyle Ganote. Honorary Pallbearers will be Turner Lee, Jerry Vales, Jordan Hobbs, and Cody Vincent. Visitation will be on Sunday, December 29th, 2019, from 3-6p.m., at McCarn Funeral Home in Talihina, Oklahoma. Services will be on Monday, December 30th, 2019, at 11:00a.m., at Grace Indian Baptist Church in Talihina, Oklahoma, with Bro. Raymond Johnson officiating. Interment will follow at the New Talihina City Cemetery. Services have been entrusted to McCarn Funeral Service of Talihina, Oklahoma.

The sun rose for Dickie Joe Bradford on January 29th, 1947. He was 72 and at home with family when the sun set for him on December 25th, 2019. He is survived by his wife of 41 years, Patricia Bradford; their children, Kevin Ganote, Chris Ganote,... View Obituary & Service Information

The family of Dickie Joe Bradford created this Life Tributes page to make it easy to share your memories.

Customized sympathy cards. Mailed for you.