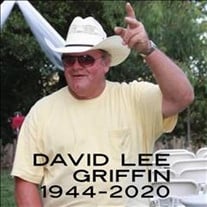 David Lee Griffin, Born August 27 1944 Passed away from Cancer, Sunday May 24, 2020 surrounded by his Wife, Children, Sister and Niece. David, or most called him "Butch" has had a long and good life. His daddy taught him how to dig up the land when he was little and David learned how to farm trees. He was a Peach, Almond & Walnut Farmer throughout his life. He also worked in the Canery in Riverbank, California for many years as a mechanic. There was nothing he couldn't do or fix. It was something his family was very proud of. David was the hound hunters of all Hound hunters. If you had a hound in California, you knew Butch Griffin. His CB handle was Chief and rightly so. He was the big boss man and ran the show. He raised, trained and sold more then anyone in the game. He loved the sport, and loved the sound of the dogs as they chased their prey down, ran it up and tree and celebrated their victory. The dogs and Butch were n sync together, he knew them like the back of his hand and they knew exactly what he expected of them. Although Hunting was the first love of his life, his wife, Johnnie Faye Mullins of Wilburton Ok (married almost 41 years) was the main love of his life. He was such a romantic when it came to Johnnie, he always said he'd gladly give his life a thousand times before he let anything happen to her. They created a beautiful life together in the Valley of California. Raising trees, and raising babies. They first gave birth to Dusty Merle Griffin in 1981 and then Amanda Jolene Griffin Anderson in 1983. He also had a child From a previous marriage Amy Griffin born 1964. And Johnnie has a child from her previous marriage whom he raised as his own, Chad Cooper born 1974. He loved his kids more then life itself and would've done anything to see them smile. He was a fantastic father, creating a different kind of bond and relationship with each of them. They can each tell you stories and different sides of him, that no one else knew. He always adapted to the people he was around and made them feel like the most important person in the room. David and Johnnie spent a life helping and serving others. If anyone needed anything, a place to stay, a hot meal, a reality check, a little bit of grocery money, or a solid prayer up to Jesus, they were the go to. They helped many people over the years and held a special place and so many peoples hearts. David was the big heroic brother, uncle and pseudo dad and some would say the patriarch of their very large family. The news of his passing has shaken many people to the core leaving holes in their hearts, but his memory will always be there to reminisce and smile upon. To know David was to love him. He never met a stranger and had an old school country boy way of thinking. He stood firm in his beliefs and couldn't be swayed. It's that stubborn will that we all loved so much and most of us inherited. We jokingly say "we get that from the Griffins" along with a very prominent dimple in our chins. David, Butch, Chief, & Daddy will be gravely missed. Jesus bought and paid for him so we're fortunate to see him on the other side. Thank you for teaching us about the Lord, life and making your own luck. We will meet you at the river underneath the peach tree, so go rest high on that mountain daddy, tree yourself a bear and send us some signs that you're doing way better off then we are down here. Love you mean it. David is succeeded by his Wife: Johnnie Griffin; children and their spouses: Amy Griffin + Wes Wrathall, Chad Cooper, Dusty Griffin + Tina Dice & Amanda + Ace Anderson. Sadly he's leaving a legacy to strive towards for his grandchildren whom he adored, CJ Griffin, Tristan Panzullo, Sierra Cooper, Austin Cooper, Jachob Cooper, Mason Cooper, Gracie Faye Anderson, Cash Anderson, & Lane Anderson, Hunter Griffin, Brantley Griffin, and Reagan Griffin. He also leaves behind three sisters, Carol Jean Longden, Ruth Henley, & Janie Griffin. He also leaves behind his brothers and sister in laws Jodi Pini, Steve Mullins, Ron Pini, & Bobby Henley. He leaves nieces and nephews, Nancy Hill, Jimmy Longden, Ryan Longden, Angela Brammer, Rob Henley, Hydie Peyton, Becky Brown, Laura Morris, Tiffeny Stinson, Eric Cates, Mary Anderson, Marie Bell, Wendy Plata, Sandra Pennington, Benjamin Malik II, Catarina Girard, Chrissy Gonzalez, & Shawna Griffin. And many many great nieces and nephews. He also leaves behind MANY friends who adored him and are grieving also. He is preceded in death by his parents; Merle & Mary Jane Griffin, his in-laws, Helen Faye & Mike Mullins. He's also preceded by his brother Danny Griffin, brother in law Dale Longden, and sister Joyce Cates. Sadly also preceded by his nephew Russel Cates & Great Nephew Rusty Brown. Gone, but never forgotten. Rest Easy big Chief. Celebration of Life Service will be on Monday, June 1st, 2020 at 2:00 PM at McCarn Funeral Home Chapel in Talihina, Oklahoma.

David Lee Griffin, Born August 27 1944 Passed away from Cancer, Sunday May 24, 2020 surrounded by his Wife, Children, Sister and Niece. David, or most called him "Butch" has had a long and good life. His daddy taught him how to dig up the land... View Obituary & Service Information

The family of David Griffin created this Life Tributes page to make it easy to share your memories.

Send flowers to the Griffin family.