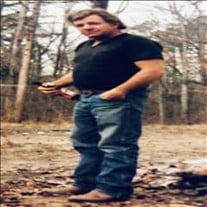 Danny Frank Griffitts was born in Ft. Bragg, California on April 25th 1951 to Marion Frank Grffitts and Kathryn May Robertson Griffitts. Danny departed this world with his family beside him to join our Heavenly Father on January 22, 2021 at St. Francis Hospital in Tulsa, Ok. related to years of heart and other health complications. Although Danny was born in California, he always considered Southeastern Ok. his home, where he lived in Talihina for the latter part of his life. Danny was loved by many and his children and grandchildren were his world. Danny attended Talihina High School then went on to start a career with his father Marion Griffitts in heavy equipment operating, where he later traveled all throughout the western states for work and was highly respected for his job performance and knowledge of dirt work. During his years of working Danny worked his way up to superintendent and employed many of his close family members. At times his entire crew were all members of the Griffitts family. Danny is proceeded in death by his parents, Marion Griffitts, Kathryn Robertson and one sister June Cox. He is survived by four siblings, Shirley Clemens, Tim Griffitts, Sandy Snellen and Lewis Griffitts. Seven children Adam Griffitts, Ryan Griffitts, Dave Griffitts, Amanda Griffitts Little, Stacy Born, Micheal Barnes and Frankee Griffitts along with many grandchildren and great grandchildren. Viewing will be held at McCarn Funeral Home 500 Dallas St. Talihina, Ok Saturday January 30th, 2021 from 10am till 1pm. Family will coduct the services with Rev. Gil Hooper of Stillwell, Ok. from 12pm till 12:30pm then family singing from 12:30 till 1pm. McCarn Funeral Service will conduct graveside services at 2pm with Reverend Gil Hooper officiating at Prairie Grove Cemetery, 39563 Oklahoma 63, Talihina, Ok. Fellowship will follow at Albion First Baptist Church off Kentucky Ave. and Dukes St. in Albion, Ok. with special thanks to Travis Long. Danny Griffitts will be missed and never forgotten. Special gratitude to Jim and Linda Lawson for their financial generosity.

Danny Frank Griffitts was born in Ft. Bragg, California on April 25th 1951 to Marion Frank Grffitts and Kathryn May Robertson Griffitts. Danny departed this world with his family beside him to join our Heavenly Father on January 22, 2021 at... View Obituary & Service Information

The family of Danny Frank Griffitts created this Life Tributes page to make it easy to share your memories.

Send flowers to the Griffitts family.