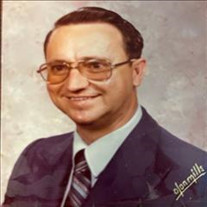 Chester Leo Cooley was born in Buffalo Valley, OK, August 3rd, 1946. He left us on August 27th, 2020, following years of bad health and pain. His brave heart finally stopped beating after a 40 day battle with covid and follow-up complications. Those who had made this journey ahead of him include: two infant children, two infant grandchildren, his son-in-law, Michael Poe, his parents, W.A. and Vernie (Foster) Cooley; brothers, William Albert Cooley, Doyle Cooley, Nathan (Mutt) Cooley, H.O. (Nook or Joe) Cooley, Billy Cooley, Bobby Cooley, Eddie Cooley, and Deuel Rose. Some of these brothers were gone before Chester was born but they were important to him. When he called the family roll, he always included their names. He leaves behind; his wife, Helen (Sturdivant) Cooley of the home in Buffalo Valley, daughter, Kay Lynn Poe of Buffalo Valley, and son and daughter in law, Vernon and Misty Cooley of Tulsa, OK; grandchildren, Matt and Laura Poe of Ringling, OK, Kris and Jessica Poe of Brookfield, WI, Kassi and Jesse Kilcrease of Ratliff City, OK, Ben and Amanda Poe of Ft. Benning, GA, Sarina Cooley and Jackson Cooley of Tulsa, OK; great grandchildren, Ryker, Ryder, and Ryler Poe of Ringling, OK, Natalie and Audrey Poe of Brookfield, WI, Noah, Brynlee and Jentry Kilcrease of Ratliff City, OK, Noah and Vivian Poe of Ft. Benning, GA. He is also survived by brothers and sisters-in-law, James and Marcella Cooley of Sapulpa, OK, Haskell and Jolee Cooley of Wichita, KS, Edna Cooley of Ada, OK, sister, Louise Winsworth of Broken Arrow, OK, brother-in-law and sisters-in-law, Kenneth and Zenith Sturdivant, Peggy Young, and Nevada Sturdivant, all of Ozark, AR. He leaves many nieces, nephews, and cousins. He is also survived by the residents, current and former, of Buffalo Valley, OK, all of whom he considered to be part of his family. Being a Cooley, Chester had to sing. His first concert was in Leflore, OK, when he was five years old. He had wonderful memories of his time with the Cooley Joy Bells, and later singing with many members of his family. He was performing as part of the Cooley Brothers trio when he felt led to go into full-time preaching. Chester knew as a preschooler that God had called him to preach. He delivered his first sermon at the age of 12 in Yanush Assembly of God. His life-long desire to be a pastor was fulfilled when, at age 23, he left the area he loved to take a church in the Oklahoma panhandle. Over the years, he served five Assemblies of God congregations in Oklahoma, Boise City, Dustin, Wetumka, Holdenville, and Haileyville. Some of those years were not easy physically or financially, but much good was accomplished spiritually. Seeing his own children living for God was his highest reward for his work. No sacrifice was too great for him to make. He often quoted 1 Timothy 1:12, "I thank Christ Jesus our Lord, who hath enabled me, for that he counted me faithful, putting me into the ministry." He sincerely believed that God had given him the privilege of knowing and working with some of the best people in the world. When failing health prevented further pulpit service, Chester began a Facebook ministry, which proved to be a blessing, even to many strangers from all parts of the United States. He spent his last days in the hospital praying and witnessing to his nurses. He fought a good fight and he kept the faith. Today, he is with Christ, which is far better. Pallbearers will be Matt Poe, Ryker Poe, Ryder, Poe, Kassi Kilcrease, Kris Poe, Ben Poe, Gary Cooley, Gordon Sturdivant, Gary Dutton, T.L. Sturdivant, and Cason Cooley. Visitation will be on Monday, August, 31st, 2020 from 4:00 PM to 7:00 PM at McCarn Funeral Service in Talihina, Oklahoma. Graveside services will be on Tuesday, September 1st, 2020 at 10:00 AM at Laura Cemetery in Buffalo Valley, Oklahoma with Bro. Vernon Cooley officiating. Services have been entrusted to McCarn Funeral Service of Talihina, Oklahoma. DUE TO WEATHER CONDITIONS, SERVICES HAVE BEEN MOVED TO THE CHAPEL AT MCCARN FUNERAL HOME

The family of Chester Leo Cooley created this Life Tributes page to make it easy to share your memories.

Send flowers to the Cooley family.