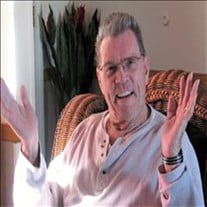 Bruce Tuthill was born in Birmingham, England on July 26, 1943. He was born Michael Ernest Robson. As a small child he immigrated to the United States with many other children and families who had suffered the ravages of WWII. He was adopted in Pasadena California and raised there. He became a naturalized citizen at the age of 18. He is survived by his wife Christine, whom he met in 1984 and married in 1986. Together they have cared for and loved, in good times and in bad, their seven children: Michele Tuthill, Lisa Tuthill Rhodes (Steven), David Tuthill, Peter Tuthill, Shawn Tuthill, Jeremy Crockett (Nicole), and Amy Capuano Prigmore (Richard). Also eleven grandchildren and several great grandchildren. His three sisters, Janet, Jackie and Tricia also mourn his passing. He is also survived by his favorite pianist, Renee Hamaty. He was preceded in death by his parents, Arch and Helen Tuthill and his mother Georgina Robson. A centerpiece of Bruce's life was music. He excelled in opera, but also loved musical theater. His music will live on beyond his death and he considered his talent a gift from God. His favorite role was Don Quixote in "The Impossible Dream". In a sense his life was like the "quest" of Don Quixote who followed his quest to "add some measure of grace to the world". That indeed Bruce did�not without error or stumbling�but he did add a measure of grace and love and understanding to his friends, his family and his Church family. He has been a cantor in the Roman Catholic Church for the last 20 years. He found the fullness of Faith and Truth in the Church and became a Catholic 20 years ago. It was the culmination of a lifetime of searching through churches and religions that he never found fulfilling. In this last year he was lovingly and professionally cared for by many members of Elara Hospice Care who made the difficulties bearable and put him in his place when needed. Their contribution to his life was short in duration but timeless in the memory of his family. He shared his sense of humor in dying with them. Bruce carried his native British humor throughout his life with its strong sense of satire. If he made a barbed comment to you�he liked you a lot. All the notes he hit in his life, the high notes and the low notes, will remain with his friends and family. He indeed added a measure of grace to our lives and we are better for it. To you Bruce, from Chris�.OFF YOU GO! Rosary Service will be at 5:30 on Thursday, February 20th, 2020 at St. Catherine of Siena Catholic Church in Talihina, Oklahoma. Mass of Christian Burial will be at 11:00AM Friday, February 21st, 2020 at the St. Catherine of Siena Catholic Church in Talihina, Oklahoma with Father Jim Caldwell, Father Hrudaye Gade, and Fr. Khiet Nguyen officiating. Interment will follow at the New Talihina City Cemetery in Talihina, Oklahoma. Services have been entrusted to McCarn Funeral Service of Talihina, Oklahoma.

Bruce Tuthill was born in Birmingham, England on July 26, 1943. He was born Michael Ernest Robson. As a small child he immigrated to the United States with many other children and families who had suffered the ravages of WWII. He was adopted... View Obituary & Service Information

The family of Bruce Tuthill created this Life Tributes page to make it easy to share your memories.

Send flowers to the Tuthill family.