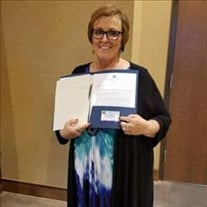 Reverend Brenda Kay (Linker) Mathews passed away September 3rd, 2019 at her home in Yanush, Oklahoma, while surrounded by loved ones. Brenda was born June 8, 1953 in Yanush, OK, to the late Kenneth and Lenora Linker. Brenda fell in love with and married her soul mate, Edward Glenn Mathews, on June 22, 1968. Brenda's earliest ambition was to be a "mommy," a goal she succeeded at, with ten children of her own, and countless others she took under her wing and into her heart. Brenda began her family at an early age, but her loving spirit and the desire to make a change in the lives of children gave Brenda a new goal, which she achieved by getting her GED and becoming the first member of her family to attend college, completing a Bachelor of Social Work Degree. Never one to be average, Brenda continued on to earn a Master's Degree in Social Work, eventually settling into her lifelong dream of connecting children with their new, adoptive families. Brenda developed a strong relationship with Jesus Christ at an early age, a relationship that only grew stronger through the ups and downs of her life. Brenda began to feel the calling God had placed on her heart to become a minister. Over the last several years, she has worked tirelessly through her church, The Yanush Assembly of God, and the Assembly of God Association to fulfill the requirements for ordination. This final goal was completed, September 3, 2019, shortly before Reverend Brenda Kay Mathews went on to be with her Lord. Brenda is survived by her husband, Edward Mathews, and nine children: Wendy and Daniel Mitchell of McAlester, OK; Devin and Rhona Mathews of Frisco, TX; Jerry Mathews of Buffalo Valley, OK; Miranda and Michael Friedman of Norman, OK; Renae and Cole Wheatley of Houston, TX; Megan Mathews of Frisco, TX; Julie Mathews of Norman, OK; Krystal and Cody Simmons of Norman, OK and Ciera Mathews of Yanush, OK; two sisters: Glenna Watkins of Buffalo Valley, OK; and Greta Linker of Buffalo Valley; as well as fourteen grandchildren, two great-grandchildren, and numerous cousins, nieces, and nephews. Brenda is preceded in death by: her parents, Kenneth and Lenora Linker; one sister, Darla June Linker; and one daughter, Sherry Lynette Mathews. Services will be on Saturday, September 7th at 10:00 a.m. at the Yanush Assembly of God Church. The service will be officiated by Bro. Dustin Grammar and Bro. Jeremy Bull, with interment at Cupco Cemetery in Yanush, OK. Family visitation will be on Friday, September 6th from 4:00-6:00 p.m. at McCarn Funeral Service in Talihina, OK. Services are entrusted to McCarn Funeral Services of Talihina, OK.

Reverend Brenda Kay (Linker) Mathews passed away September 3rd, 2019 at her home in Yanush, Oklahoma, while surrounded by loved ones. Brenda was born June 8, 1953 in Yanush, OK, to the late Kenneth and Lenora Linker. Brenda fell in love with... View Obituary & Service Information

The family of Brenda Mathews created this Life Tributes page to make it easy to share your memories.

Send flowers to the Mathews family.