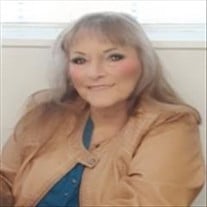 The world lost a dynamic soul January 25, 2021. Surrounded by her family at her home in Tuskahoma, Ok she went to be with our Father in heaven. Born to her parents Bobby and Margie Stillwell April 25, 1955 in Paris, TX, she was the oldest of 6 children. Even at an early age her feisty, fun-loving, and protective personality was enigmatic! She loved her parents and was especially protective of her siblings Linda, Lane, Donna, Rhonda, and Michael. One day when she was five years old, she and her sister were walking home from school when a man tried to get them in his car with candy. She threw rocks and busted his window causing him to flee. This was one of many times her strong spirit shined. Brenda excelled at everything she put her mind to. No one ever had to guess what was on her mind because she was sure to let everyone know. It never mattered a person's race, social status, or success. She treated everyone the same on the content of their character and had many friends. After her first marriage ended, she found herself moving back to TX with her baby in arms to start a new life. Little did Bob Allison from Reno, TX know that a petite feisty blonde with a baby boy would steal his heart. After dating two years, Bob forever changed their last name to Allison on Sept. 11, 1976. A marriage made in heaven their little family grew to three children, eleven grandchildren, and four great grandchildren. She devoted her life to her family as a homemaker. Although being a wife and mother was her most valued achievement, she earned her Associate in Nursing along the way. Brenda never thought her value was in degrees or money, but always new her value came from Christ and her family. Brenda survived by her husband of forty-five years and her children: Son Bobby Allison and wife Danetta, their children: Josh, Jake, Alaina and her children Delilah, Jr., and JJ. Son Jesse Allison and wife Kaletta, their children: Austin Allison and his fianc� Heather Pelt and their son Reidan, Ethan, Jackson, Kaden, and Maxton. Daughter Casie Smith and husband Terrence and their children: Morgan Allison and his fianc� Lauren Frazier, Joseph, and Emma. She was lovingly called by many names, but Brenda Wayne, Mom, and Nana were the most popular. There is no doubt God placed her exactly where she needed to be in life, to mold the spirited soul he created into a pearl. Everyone's favorite aunt, she was spunky, outspoken, and bubbly. What a combination! She was the keeper of snacks and never failed in providing a warm loving home. Oh, how she will be painfully missed in our lives, but forever rejoiced in heaven. We love and miss you terribly Brenda Wayne, Mom, Nana. The 3rd rock will be awfully dull without you, but we're all counting the days we can all be reunited in Glory. Love you bunches and gobs. The family will hold a memorial service at a later date.

The world lost a dynamic soul January 25, 2021. Surrounded by her family at her home in Tuskahoma, Ok she went to be with our Father in heaven. Born to her parents Bobby and Margie Stillwell April 25, 1955 in Paris, TX, she was the oldest of... View Obituary & Service Information

The family of Brenda Jo Allsion created this Life Tributes page to make it easy to share your memories.

Send flowers to the Allsion family.