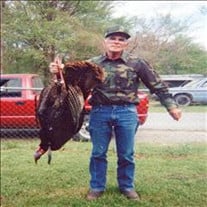 Billy Paul Smith was born on May 21st, 1938 to Grace (Barnett) Smith and Joe Smith. He was the 3rd child of seven children. The Smith's lived out in the country south of Whitesboro, where Billy was born. Billy learned how to hunt and fish at an early age. Over the years, he taught nearly all of his nephews how to hunt. Later in life, he taught his son Mike and wife, Crystal and Molly (whom him and Marilyn raised from a baby) how to hunt. He married Marilyn Lowe in 1979 and together they raised her two children, Mike Lowe and Chris Lowe, then raised their granddaughter, Molly, the light of his life. Bill had several jobs growing up, working in the grocery store, driving school bus, working with Harold Ivy building houses, worked with Johnnie Williams building cellars and eventually retiring from the Talihina Veteran's Center in 2000. Billy loved to hunt deer, turkeys and especially wild hogs. He loved his dogs, Thunder basketball and OU football. He would also watch politics on TV. Billy passed away from this life on October 6th, 2020 at his home with his family by his side. Billy is preceded in death by his parents, Gracie and Joe; brothers, Don, Kenneth, and Roy; sisters, Evelyn and husband Cotton Bowman and Bernice and husband Richard Medlock; one niece, Debbie Lawrence and two great nephews, Dalton and Daryl. Billy is survived by his loving wife of the home, Marilyn; son, Mike and wife Crystal Lowe of Talihina, OK; daughter, Christina and husband Robert Martin of Hartshorne, OK one sister, JoAnn Martin of Talihina, OK; one sister in law, Lois Smith of Whitesboro, OK; eleven grandchildren, six great grand children, as well as numerous nieces and nephews and cousins. He is also survived by many friends and a special niece and her three children, which they drove him nuts at times, but deep down he loved them all. Pallbearers will be Duck Cripps, Ronnie Rose, Gary Rose, Eugene Norvell, Eugene Baugh, and Jesse Williams. Honorary Pallbearers will be Jacob Smith, Billy Smith, Kenny Smith, Donnie Medlock, Ricky Medlock, Mitch Lanning, Raymond Bowman, Bradley Johnson, and Porter Smith. Guest book will be available for signing at McCarn Funeral Service from 9:00 AM to 5:00 PM. Graveside services will be on Monday, October 12th, 2020 at 2:00 PM at Whitesboro Cemetery in Whitesboro, Oklahoma with Bro. Sam Dyer officiating. Services are under the direction of McCarn Funeral Service of Talihina, Oklahoma.

Billy Paul Smith was born on May 21st, 1938 to Grace (Barnett) Smith and Joe Smith. He was the 3rd child of seven children. The Smith's lived out in the country south of Whitesboro, where Billy was born. Billy learned how to hunt and fish... View Obituary & Service Information

The family of Billy Paul Smith created this Life Tributes page to make it easy to share your memories.

Send flowers to the Smith family.