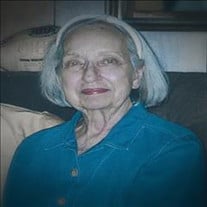 Betty Sue (Scott) Stephens was born December 12, 1923 at Durant, Oklahoma to Robert Walden Scott and Susan Pearl Coker Scott. She went to be with the lord April 3, 2020. She was of the Methodist faith. Betty was one of eight children; One brother, Charles and six sisters: Minnie, Opal, Lena, Bobbie, Imogene and Aileen. She attended grade school and high school at Atoka, Oklahoma. Shortly after her graduation, she married Sam M. Stephens on May 12, 1943 in Atoka, Oklahoma. They then moved to San Diego, where Sam was stationed in the U.S. Navy. For two years she worked for the Consolidated Aircraft Company while Sam trained military troops. After World War II, they returned to Atoka. Shortly thereafter their first child Sammy was born. His brother John appeared on the scene three years later in Muskogee, Oklahoma. The family moved to Clayton, Oklahoma in 1963. Sam conducted business at Clayton State Bank and Betty managed the children and home. She loved to cook meals for her family and entertain both friends and family. Betty enjoyed going on trips with Sam, their boys and grandchildren and occasionally friends of the grandchildren for extra entertainment. In earlier years she enjoyed gardening and canning. In later years, she enjoyed playing Dominoes with her neighbor, Danny Zachary and visiting with friends on the phone. Betty was preceded in death by her husband of 66 years, Sam Stephens; her parents and siblings; two sons, Robert and John; one great grandson, Uriah; and grandson-in-law, Damon Briggs. She is survived by her son, Sam and wife Janice of Clayton, Oklahoma; four grandchildren: Jody, Scott, Coy and wife Whitney, and Calvin; six great grandchildren: Tristan, Piper, Chance, Cooper, Aidon, and Camdyn; three great-great-grand-children: Luke, Wynter, and Peyton; and many nieces and nephews. Pallbearers will be Coy Stephens, Aidon Stephens, Tristan Stephens, David Ralston, John Lance, and Stephen Poe. Graveside Services will be at 2:00 PM on Tuesday, April 7th, 2020 at AL Stephens cemetery with Bro. Gary Fuller and Bro. Pete Heflin officiating. Services are under the direction of McCarn Funeral Service of Talihina, Oklahoma.

Betty Sue (Scott) Stephens was born December 12, 1923 at Durant, Oklahoma to Robert Walden Scott and Susan Pearl Coker Scott. She went to be with the lord April 3, 2020. She was of the Methodist faith. Betty was one of eight children; One brother,... View Obituary & Service Information

The family of Betty Sue Stephens created this Life Tributes page to make it easy to share your memories.

Send flowers to the Stephens family.