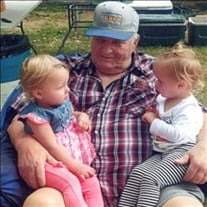 Arvil Ray Nelson, age 80, of Talihina, Oklahoma, was surrounded by his loving family at home as he passed peacefully from this earth, and was welcomed into the arms of Jesus, his Lord and Savior, on December 10, 2021. He was born to his parents, Joe and Opal Nelson, on September 5, 1941 in Folsom, OK. Arvil graduated from Coleman High School in 1959 and married the love of his life, Vera Alice Crowell, later that same year, on September 19. To their marriage, they were blessed with two daughters, Renae and Sancie. Arvil was an ambitious and hardworking young man who joined his uncle, Homer Nelson, as a carpet layer for many years. After living in the Oklahoma City area for some time, he and Vera claimed their own place to start a ranch, encircled by the beautiful Kiamichi mountains, near Talihina, OK. He started his own carpet laying business in addition to taking on a few head of cattle and some horses. As the ranch responsibilities grew, he put his carpet laying skills to rest and devoted his time and energy in caring for his livestock and tending to all the chores that vie for a rancher's time. He thoroughly enjoyed helping and watching both his daughters as they learned how to ranch and participate in rodeos and play days throughout their younger years. He was very instrumental in the start-up of the play days at the Talihina Round-Up Club, the first few being held at their own ranch. Family was of extreme importance to Arvil and he stopped at nothing to show his love and admiration for all of them. He was passionate in his work and passed on an impressive work ethic to his daughters and grandchildren. He believed in working hard first and playing hard later. He put his heart and soul into both! He was an adventuresome man who had a love of the land and enjoyed hunting and fishing. He was full of strength, laughter and had a contagious zest for life. When he walked into your presence, you knew he was there. His sparkling eyes and boisterous chuckle were captivating; his hugs tight and meaningful. Arvil had a soulful heart, a lap that never ran out of room for his children and grandchildren and during life's struggles and victories, he never lost sight of his main priority, which was providing for, protecting and loving his family. He was a dedicated and committed husband, father, grandfather and great grandfather. He will be deeply missed by all who had the privilege to know and love him. Arvil was preceded in death by his parents, Joe and Opal Nelson; brother, Alfred Nelson; grandson, Brent Pugh; mother and father in law, Martha Chloe and M.H. Crowell; and brother in law, David Longfellow. The gift of salvation and promise of eternity in Heaven is the hope that sustains us and brings joy to our hearts as we imagine his reunion with these treasured family members. He is survived by his wife of 62 years, Vera Nelson; daughter Renae Pugh and husband Gary Pugh; daughter Sancie Bandy and husband David Bandy; grandchildren, Arvil Roberts and wife Jennifer Roberts; Doug Knapp and Michelle Clark; Lane Bandy and wife Payton Bandy; Stasha Stone; great grandchildren, Lane Kennedy and Austin Kennedy; Jace Knapp, Conwy Knapp and Harper Knapp; Mallory Bandy; Hayden Stone, Zariyah Burgin and Brentlyn Burgin all of Talihina, OK; a sister, Shirley Longfellow of ElDorado, KS; brother in law, Kenneth Crowell and wife Joann of Hopewell, OK; sister in law, Jo Nelson of Aline, Ok and a host of other special family members and friends. Pallbearers are Jace Knapp Billy Knapp, Brian Blagg, Wade Hembey, Ed Blagg, Carl Dee Odom, Darrell Bowers Honorary Pallbearers are Aaron Grey, James Harrison, Ronnie Holley, John Emmert, Eual Gene Knapp, Gerald Knapp, Bill Knapp, Wes Knapp, Paul Dorsey, Sam Roberts, Gary Reamy Visitation will be on Tuesday December 14th, from 4:00PM to 7:00PM at McCarn Funeral Service in Talihina, OK. Services will be on Wednesday, December 15th, 2021 at 2:00pm at Albion Baptist Church in Albion, OK with Bro. Jeff Jensen officiating. Interment will follow at Nelson Family Cemetery. Services have been entrusted to McCarn Funeral Service of Talihina, Oklahoma.

Arvil Ray Nelson, age 80, of Talihina, Oklahoma, was surrounded by his loving family at home as he passed peacefully from this earth, and was welcomed into the arms of Jesus, his Lord and Savior, on December 10, 2021. He was born to his parents,... View Obituary & Service Information

The family of Arvil Ray Nelson created this Life Tributes page to make it easy to share your memories.

Send flowers to the Nelson family.