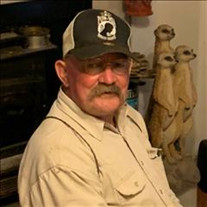 Anthony Lynn Wilmoth was born on February 6th, 1959 in Hartshorne, Ok, the third of four children of AL Wilmoth, Jr. and Betty Ruth (Robison)Wilmoth. Known as Tony to his friends and family, he lived his life as a country boy. Tony loved hunting and fishing including yearly camping trips during deer season. Tony was an avid fan of music. When he was about 12 years old, his favorites were Dave Dudley and trucker songs. He even built his own CB shack. As he matured, John Prine became one of his all-time favorites. At some point in his youth, Tony's father nicknamed him "Hacksaw" and it stuck for life. Tony graduated from Buffalo Valley High School in 1977 and immediately pursued his life-long trade as a pipe welder. He traveled the U.S. from coast to coast, including Alaska, for almost 40 years. He was a union member throughout his career and retired from the Plumbers & Pipefitters, Local 100, Dallas, TX in 2014. Tony was fiercely loyal to his family and friends and he loved all animals. He had three very special friends in his dogs: Pretty Boy, Hooter and Gizmo. Tony met the love of his life, Jackie Brock, in 1987 and they married at the Miller County Courthouse, Texarkana, AR October 18, 2002. Tony and Jackie have been active members of Pike Baptist Church since 2005. Together they most recently shared their love for their three dogs, Little Miss, Mister and Belle along with a fairly recent addition of the cat, Gidget. Tony was proud of the newest members to the family who arrived in the form of three baby goats born April 7. Tony made a point of meeting people and made friends easily. He remained close with his childhood friends and never had a neighbor he didn't know. On one trip driving to Alaska, in a Wal-Mart in Montana, someone called from down the isle, "Hacksaw?" and it was a guy he had worked with and formed a lasting friendship. That scenario happened many times in many different places. Tony was committed to living life to the fullest and took every opportunity to do just that. He was a funny, kind and good man who will be missed terribly by all who love him. Tony was preceded in death by his precious mother, Betty Ruth Robinson Wilmoth; father A.L. Wilmoth, Jr.; older brother, Harper Wilmoth; mother-in-law ,Thelma Brock, and sister-in-law Debbie Bailey. Tony is survived by his wife, Jackie Brock Wilmoth; sisters, Carolyn and Fred Jackson and Kelly and David Dyer, multiple nieces, nephews. cousins and many close friends. Pallbearers will be Timmy John Young, Tim Mills, Kirk Anderson, Robert Howell, Keith Linker, Jacky Kennedy, Junior Cantrell, and Mike Humphreys Honorary Pallbearers will be Ellis Angel, Rocky Burleson, Tony Young, Bob Hendricks, Jeff Medders, Tim Humphreys, Jeff Brock, Craig Brock, Torrey Brock, and Steve Bailey Services will be on Saturday April 24th, 2021 at 10:00 AM at Valley Christian Church in Talihina, Oklahoma with Bro. Lee Allen Humphrey officiating. Interment will follow at the Young Family Cemetery in Buffalo Valley, Oklahoma. Services have been entrusted to McCarn Funeral Service of Talihina, Oklahoma.

Anthony Lynn Wilmoth was born on February 6th, 1959 in Hartshorne, Ok, the third of four children of AL Wilmoth, Jr. and Betty Ruth (Robison)Wilmoth. Known as Tony to his friends and family, he lived his life as a country boy. Tony loved hunting... View Obituary & Service Information

The family of Anthony Lynn Wilmoth created this Life Tributes page to make it easy to share your memories.

Anthony Lynn Wilmoth was born on February 6th, 1959 in Hartshorne,...

Send flowers to the Wilmoth family.